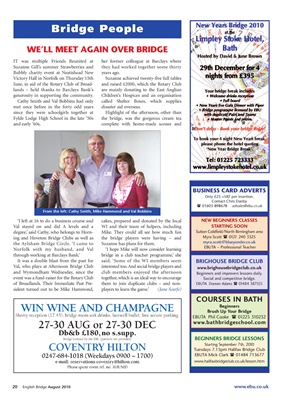 generosity in supporting the community. Children’s Hospices and an organisation

Cathy Smith and Val Bobbins had only called Shelter Boxes, which supplies

met once before in the forty odd years disaster aid overseas.

since they were schoolgirls together at Highlight of the afternoon, other than

Fylde Lodge High School in the late ’50s the bridge, was the gorgeous cream tea

and early ’60s. complete with home-made scones and

From the left: Cathy Smith, Mike Hammond and Val Bobbins

‘I left at 16 to do a business course and cakes, prepared and donated by the local NEW BEGINNERS CLASSES

Val stayed on and did A levels and a WI and their team of helpers, including STARTING SOON

degree,’ said Cathy, who belongs to Horn- Mike. They could all see how much fun Sutton Coldfield/North Birmingham area

the Aylsham Bridge Circle. ‘I came to Suzanne has plans for them. myra.scott@blueyonder.co.uk

Norfolk with my husband, and Val ‘I hope Mike will now consider learning

through working at Barclays Bank.’ bridge in a club teacher programme,’ she

It was a double blast from the past for said. ‘Some of the WI members seem BRIGHOUSE BRIDGE CLUB

Val, who plays at Afternoon Bridge Club interested too. And social bridge players and www.brighousebridgeclub.co.uk

and Wymondham Wednesday, since the club members enjoyed the afternoon Beginners and improvers lessons daily.

event was a fund-raiser for the Rotary Club together, which is an ideal way to encourage Social and competitive bridge.

sident turned out to be Mike Hammond, players to learn the game.’ (Jane Scarfe)

Brush Up Your Bridge