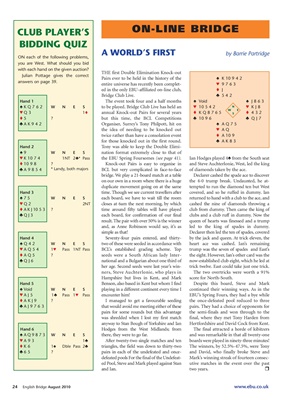 ON each of the following problems,

A WORLD’S FIRST by Barrie Partridge

you are West. What should you bid

entire universe has recently been complet- ™ 9763

ed in the only EBU-affiliated on-line club, t J

the idea of needing to be knocked out ™ A Q

twice rather than have a consolation event t A 10 9

for those knocked out in the first round. ® A K83

Hand 2 Tony was able to keep the Double Elimi-

t 10 9 8 ? Knock-out Pairs is easy to organise in and Steve Auchterlonie, West, led the king

®A 9 8 5 4 * Landy, both majors BCL but very complicated in face-to-face of diamonds taken by the ace.

bridge. We play a 21-board match at a table Declarer cashed the spade ace to discover

on our own in a room where there is a huge the 4-0 trump break. Undaunted, he at-

Hand 3 time. Though we see current travellers after covered, and so he ruffed in dummy. Ian

´75 W N E S each board, we have to wait till the room returned to hand with a club to the ace, and

™Q2 2NT closes at 6am the next morning, by which cashed the nine of diamonds throwing a

t A K J 10 5 3 ? time around fifty tables will have played club from dummy. Then came the king of

®QJ3 each board, for confirmation of our final clubs and a club ruff in dummy. Now the

result. The pair with over 50% is the winner queen of hearts was finessed and a trump

and, as Anne Robinson would say, it’s as led to the king of spades in dummy.

simple as that! Declarer then led the ten of spades, covered

Hand 4 Seventy-four pairs entered, and thirty- by the jack and queen. At trick eleven, the

´Q42 W N E S two of these were seeded in accordance with heart ace was cashed. Ian’s remaining

tAQ5 ? seeds were a South African lady Inter - the eight. However, Ian’s other card was the

®QJ6 national and a Bulgarian about one third of now-established club eight, which he led at

ners, Steve Auchter lonie, who plays in The two overtricks were worth a 91%

Hampshire but lives in Kent, and Mark score for North-South.

Hand 5 Benson, also based in Kent but whom I find Despite this board, Steve and Mark

´ Void W N E S playing in a different continent every time I continued their winning ways. As in the

tAKJ9 ? I managed to get a favourable seeding the once-defeated pool reduced to three

®AJ9 7 6 3 that would avoid me meeting either of these pairs. They had a choice of opponents for

was shredded when I lost my first match final, where they met Tony Harden from

anyway to Stan Bough of Yorkshire and Ian Hertfordshire and David Cock from Kent.

Hand 6 Hodges from the West Midlands; from The final attracted a horde of kibitzers

™A93 1® After twenty-two single matches and ten boards were played in ninety-three minutes!

®6 5 ? pairs in each of the undefeated and once- and David, who finally broke Steve and

ed Pool, Steve and Mark played against Stan utive matches in the event over the past