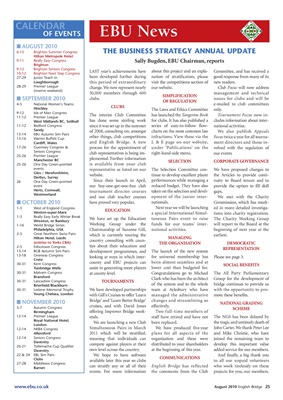 LAST year’s achievements have about this project and an expla- Committee, and has received a

27-29 Junior Teach In been developed further during nation of stratification, please good response from many of its

Loughborough this period of extraordinary visit the competitions section of new readers.

50,000 members through 600 management and technical

issues for clubs and will be

The Laws and Ethics Committee only.

West Midlands BC, Solihull has done some sterling work for clubs. It has also published a cludes information about inter-

11-12 Bedford Congress since it was set up in the summer series of easy-to-follow flow- national activities.

Sandy of 2008, consulting on, amongst charts on the most common law We also publish Appeals

13-16 Warren Buffett Cup other things, club competitions infractions. View these via the Focus twice a year for all tourna-

Cardiff, Wales and English Bridge. A new L & E page on our web site, ment direc tors and those in-

club representatives is being im- right-hand-side menu. our events

25-26 One Day Green-pointed is available from your club

26 One Day Green-pointed Since their launch in April, performances while managing a nuity to Board tenure and to

event our buy-one-get-one-free club reduced budget. They have also provide the option to fill skill

Philadelphia, USA Chairmanship of Suzanne Gill, national activities. beginning of next year at the

2-3 Great Northern Swiss Pairs which is currently touring the earliest.

2-3 Felixstowe Congress ties about their education and

13-14 BGB Autumn Sim Pairs development programmes, and The launch of the new system

13-18 Overseas Congress looking at ways in which inter- for universal membership has Please see page 3.

30-31 Malvern Congress at county level. Congratulations go to Michael The All Party Parliamentary

Clark who has been the architect Group for the development of

12-14 Premier League ends. staff have retired and have not The NGS has been delayed by

We are launching a new Club been replaced. the tragic and untimely death of

Allensford 2011 which will be stratified, plans for all aspects of the and Mike Christie, who have

Daventry own level across the country. at the beginning of this year. added service for our members.

22 & 24 EBL Sim Pairs We hope to have software And finally, a big thank you

available later this year so clubs to all our unpaid volunteers

events. For more information the comments from the Club projects for you, our members.