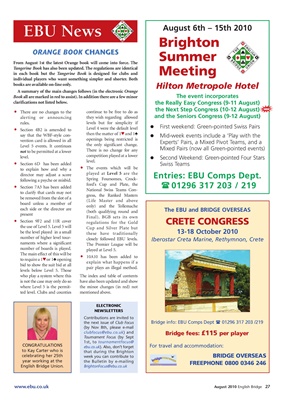 From August 1st the latest Orange book will come into force. The

Tangerine Book has also been updated. The regulations are identical

individual players who want something simpler and shorter. Both

books are available on-line only.

A summary of the main changes follows (in the electronic Orange

Book all are marked in red to assist). In addition there are a few minor The event incorporates

clarifications not listed below. the Really Easy Congress (9-11 August)

rules. levels but for simplicity if

• Section 4B2 is amended to Level 4 were the default level • First weekend: Green-pointed Swiss Pairs

say that the WBF-style con-

the only significant change. Experts’ Pairs, a Mixed Pivot Teams, and a

competition played at a lower

• Section 6D has been added

to explain how and why a • The events which will be

played at Level 5 are the

director may adjust a score

• Section 7A3 has been added

ford’s Cup and Plate, the

to clarify that cards may not

be removed from the slot of a

(Life Master and above

board unless a member of

only) and the Tollemache

each side or the director are The EBU and BRIDGE OVERSEAS

(both qualifying round and

Final). BGB sets its own

regulations for the Gold CRETE CONGRESS

Cup and Silver Plate but

naments where a significant The Premier League will be

number of boards is played. played at Level 5.

The main effect of this will be

explain what happens if a

bid to show the suit bid at all

levels below Level 5. Those

Contributions are invited to

clubfocus@ebu.co.uk) and Bridge fees: £115 per player

to Kay Carter who is that during the Brighton

celebrating her 25th week you can contribute to BRIDGE OVERSEAS

year working at the the Bulletin by e-mailing