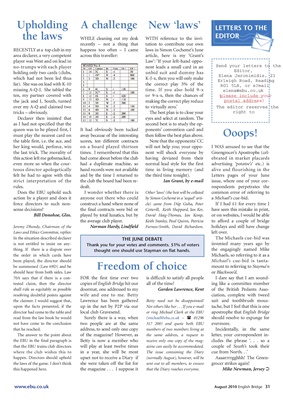 Upholding A challenge New ‘laws’ LETTERS TO THE

recently – not a thing that tation to contribute our own

area declarer, a very competent across this traveller: article, here is my ‘Grant’s

player was West and on lead in Law’: ‘If your left-hand oppo-

which had not been led thus K-J-x, then you will only make Erleigh Road, Reading

missing A-Q-J. She tabled the time. If you also hold 9-x elena@ebu.co.uk

ten, my partner covered with or 9-x-x, then the chances of (please include your

the jack and I, South, turned making the correct play reduce postal address)

over my A-Q and claimed two to virtually zero.’ The editor reserves the

tricks – obviously. The best plan is to close your right to

Declarer then insisted that eyes and select at random. The

queen was to be played first, I It had obviously been tucked ponents’ convention card and

must play the nearest card on away because of the interesting then follow the best plan above. Ooops!

the table first, i.e. the ace, and scores, ten different contracts Note that the opponents’ CC

her king would, perforce, win on a board played thirteen will not help you; your oppo- I WAS amused to see that the

the last trick. The morality of times. I remembered that this nent will shock everyone by Greengrocer’s Apostrophe (cel-

this action left me gobsmacked, had come about before the club having deviated from their e brated in market placards

even more so when the cour- had a duplimate machine, so normal lead style for the first advertising ‘potatoe’s’ etc.) is

felt he had to agree with this and by the time I returned to the third time tonight). Letters pages of your June

strict interpretation of the the club the board had been re- Ian Grant, by e-mail issue, where one of your cor-

action by a player and does it anyone out there who could by Simon Cochemé in a ‘sequel’ arti- a Michael’s cue-bid.

force directors to such non- construct a hand where none of cle) came from Diip Guha, Peter If I had £1 for every time I

sense decisions? the final contracts were bid or Cotterill, Keith Sheppard, Ian Ker, have seen this mistake in print,

Bill Donohoe, Glos. played by total lunatics, but by David Haig-Thomas, Ian Kemp, or on websites, I would be able

is not entitled to insist on any- Thank you for your votes and comments. 51% of voters invented many years ago by

thing. If there is a dispute over thought one should use Stayman on flat hands. the engagingly named Mike

the order in which cards have Michaels, so referring to it as a

been played, the director should Michael’s cue-bid is tanta -

should hear from both sides. Law

Freedom of choice mount to referring to Stayma’n

tested claim, then the director copies of English Bridge hit our all of the time! ing like a committee member

shall rule as equitably as possible doormat, one addressed to my Gordon Lawrence, Kent of the British Pedants Asso-

resolving doubtful points against wife and one to me. Betty ciation, complete with tweed

the claimer. I would suggest that, Lawrence has been gathered Betty need not be disappointed! suit and toothbrush mous-

upon the facts presented, if the up in the net by P2P via our Nor others like her . . . If you e-mail tache, but I feel that this is one

director had come to the table and local club Gravesend. or ring Michael Clark at the EBU apostrophe that English Bridge

read from the law book he would Surely there is a way, when (michael@ebu.co.uk – ( 01296 should resolve to expunge for

not have come to the conclusion two people are at the same 317 200) and quote both EBU evermore.

that he reached. address, to send only one copy numbers of two members living at Incidentally, in the same

The answer to the point about of the magazine? However, as the same address, a request to letter, your correspondent in-

the EBU in the final paragraph is Betty is now a member who receive only one copy of the mag- cludes the phrase ‘. . . so a

that the EBU trains club directors will play at least twelve times azine can easily be accommodated. couple of South’s took their

where the club wishes this to in a year, she will be most The issue containing the Diary cue from North. . .’

happen. Directors should uphold upset not to receive a Diary if (normally August), however, will be Aaaarrrrgghhh! The Green-

the laws of the game. I don’t think she were taken off the list for sent out to all members, to ensure grocer strikes again!

this happened here. the magazine . . . I suppose it that the Diary reaches everyone. Mike Newman, Jersey Ú