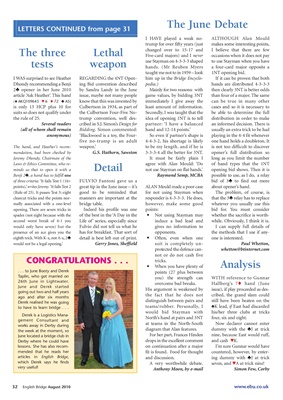 I HAVE played a weak no- ALTHOUGH Alan Mould

trump for over fifty years (just makes some interesting points,

2® opener in her June 2010 by Sandra Landy in the June Mainly for two reasons: with then clearly 3NT is better odds

article ‘Ask Heather’. This hand issue, maybe not many people game values, by bidding 3NT than four of a major. The same

is only 13 HCP plus 10 for Culbertson in 1934, as part of least amount of information. cases and so it is necessary to

suits so does not qualify under the Culbertson Four-Five No- Secondly, I was taught that the be able to determine the full

the rule of 25. trump convention, well des- idea of opening 1NT is to tell distribution in order to make

Several readers cribed in S.J. Simon’s Design for partner: ‘I have a balanced an informed decision. There is

(all of whom shall remain Bidding. Simon commented: hand and 12-14 points.’ usually an extra trick to be had

anonymous) ‘Blackwood is a toy, the Four- So even if partner’s shape is playing in the 4-4 fit whenever

five no-trump is an adult 4-4-3-2, his shortage is likely one hand holds a doubleton. It

The hand, and Heather’s recom- weapon.’ to be my length. and if he is is not too difficult to discover

mendation, had been checked by G.S. Hathorn, Sawston 3-3-3-4 all the better for 3NT. opener’s full distribution so

Jeremy Dhondy, Chairman of the It must be fairly plain I long as you limit the number

Laws & Ethics Committee, who re- agree with Alan Mould: ‘Do of hand types that the 1NT

minds us that to open it with a Detail not use Stayman on flat hands.’ opening bid shows. Then it is

Benji 2®, a hand has to fulfill one Raymond Semp, MCBA possible to use, as I do, a relay

(Rule of 25). It passes Test 3: eight good to be reminded that for not using Stayman when The problem, of course, is

clearcut tricks and the points nor- manners are important at the responder is 4-3-3-3. He does, that the 3® relay has to replace

mally associated with a one-level bridge table. however, make some good whatever you usually use this

opening. There are seven tricks in Indeed his profile was one points: bid for. You must consider

second worst break of 4-1 you Life of ’ series, especially since induce a bad lead and while. Obviously, I think it is.

presence of an ace gives you the has for breakfast. That sort of opponents. the methods that I use if any-

eighth trick. With K-x, not A-x, 2® detail is best left out of print. • Often, even when one one is interested.

would not be a legal opening.’ Gerry Jones, Sheffield suit is completely un - Paul Whetton,

protected the defence can- whetton@btinternet.com

not or do not cash five

• When you have plenty of Analysis

Taplin, who got married on you) the strength can WITH reference to Gunnar

His argument is weakened by issue), if play proceeded as des-

going out two and half years

ago and after six months

the fact that he does not cribed, the grand slam could

to have to learn bridge . . . teams/rubber. Personally, I ´K lead, if East had discarded

would bid Stayman with his/her three clubs at tricks

Derek is a Logistics Mana-

North’s hand at pairs and 3NT four, six and eight.

the week at the moment, so diagram that Alan features. dummy with the ®J at trick

June located a bridge club in For her part, Frances Hinden nine, because East would ruff,

Derby where he could have drops in the excellent comment and cash ™K.

lessons. She has also recom- on continuation after a major I’m sure Gunnar would have

mended that he reads her fit is found. Food for thought countered, however, by enter-

articles in English Bridge, and discussion. ing dummy with ®J at trick

which Derek says he finds A very worthwhile debate. seven, and ™A at trick nine!