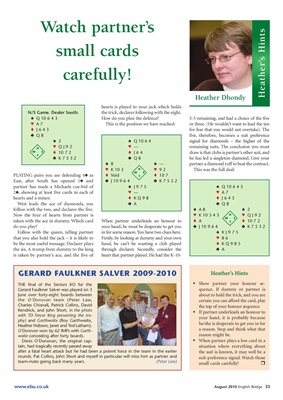 hearts is played to your jack which holds

™ A7 This is the position we have reached: or three. (He wouldn’t want to lead the ten

t J643 for fear that you would not overtake). The

taken with the ace in dummy. Which card When partner underleads an honour to t A S t 10 7 2

Follow with the queen, telling partner in for some reason. You have two clues here. ´ KJ975

that you also hold the jack – it is likely to Firstly, by looking at dummy and your own ™ 86

be the most useful message. Declarer plays hand, he can’t be wanting a club played t KQ985

the six. A trump from dummy to the king through declarer. Secondly, consider the ® A

is taken by partner’s ace, and the five of heart that partner played. He had the K-10-

Gerard Faulkner Salver was played on 3 quence. If dummy or partner is

June over forty-eight boards between about to hold the trick, and you are

the O’Donovan team (Peter Law, certain you can afford the card, play

Kendrick, and John Short, in the photo

your hand, it is probably because

Heather Hobson, Janet and Ted Latham). he/she is desperate to get you in for

O’Donovan won by 62 IMPs with Garth- a reason. Stop and think what that

Denis O’Donovan, the original cap- • When partner plays a low card in a

tain, had tragically recently passed away situation where everything about

after a fatal heart attack but he had been a potent force in the team in the earlier the suit is known, it may well be a

rounds. Pat Collins, John Short and myself in particular will miss him as partner and suit-preference signal. Watch those