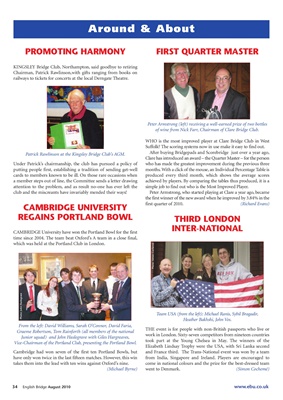 railways to tickets for concerts at the local Derngate Theatre.

of wine from Nick Farr, Chairman of Clare Bridge Club.

Suffolk? The scoring systems now in use make it easy to find out.

Patrick Rawlinson at the Kingsley Bridge Club’s AGM. After buying Bridgepads and Scorebridge just over a year ago,

Clare has introduced an award – the Quarter Master – for the person

Under Patrick’s chairmanship, the club has pursued a policy of who has made the greatest improvement during the previous three

putting people first, establishing a tradition of sending get-well months. With a click of the mouse, an Individual Percentage Table is

cards to members known to be ill. On those rare occasions when produced every third month, which shows the average scores

a member steps out of line, the Committee sends a letter drawing achieved by players. By comparing the tables thus produced, it is a

attention to the problem, and as result no-one has ever left the simple job to find out who is the Most Improved Player.

club and the miscreants have invariably mended their ways! Peter Armstrong, who started playing at Clare a year ago, became

the first winner of the new award when he improved by 3.84% in the

time since 2004. The team beat Oxford’s A team in a close final,

which was held at the Portland Club in London.

Graeme Robertson, Tom Rainforth (all members of the national THE event is for people with non-British passports who live or

Vice-Chairman of the Portland Club, presenting the Portland Bowl. took part at the Young Chelsea in May. The winners of the

Elizabeth Lindsay Trophy were the USA, with Sri Lanka second

Cambridge had won seven of the first ten Portland Bowls, but and France third. The Trans-National event was won by a team

have only won twice in the last fifteen matches. However, this win from India, Singapore and Ireland. Players are encouraged to

takes them into the lead with ten wins against Oxford’s nine. come in national colours and the prize for the best-dressed team