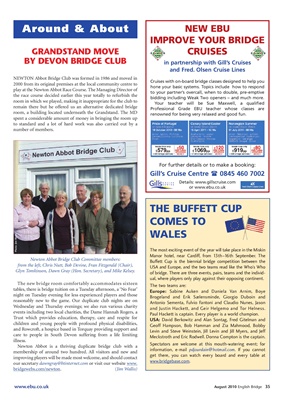 Around & About NEW EBU

BY DEVON BRIDGE CLUB in partnership with Gill’s Cruises

NEWTON Abbot Bridge Club was formed in 1986 and moved in

Cruises with on-board bridge classes designed to help you

2000 from its original premises at the local community centre to

hone your basic systems. Topics include how to respond

play at the Newton Abbot Race Course. The Managing Director of

to your partner’s overcall, when to double, pre-emptive

the race course decided earlier this year totally to refurbish the bidding including Weak Two openers – and much more.

room in which we played, making it inappropriate for the club to Your teacher will be Sue Maxwell, a qualified

room, a building located underneath the Grandstand. The MD renowned for being very relaxed and good fun.

spent a considerable amount of money in bringing the room up

For further details or to make a booking:

Manor hotel, near Cardiff, from 13th–16th September. The

from the left, Chris Nutt, Bob Devine, Fran Fitzgerald (Chair), USA and Europe, and the two teams read like the Who’s Who

Glyn Tomkinson, Dawn Gray (Hon. Secretary), and Mike Kelsey. of bridge. There are three events, pairs, teams and the individ-

ual, where players only play against their opposing continent.

tables, there is bridge tuition on a Tuesday afternoon, a ‘No Fear’ Europe: Sabine Auken and Daniela Van Arnim, Boye

night on Tuesday evening for less experienced players and those Brogeland and Erik Sælensminde, Giorgio Duboin and

reasonably new to the game. Our duplicate club nights are on Antonio Sementa, Fulvio Fantoni and Claudio Nunes, Jason

events including two local charities, the Dame Hannah Rogers, a Paul Hackett is captain. Every player is a world champion.

and Rowcroft, a hospice based in Torquay providing support and Levin and Steve Weinstein, Jill Levin and Jill Myers, and Jeff

care to people in South Devon suffering from a life limiting Meckstroth and Eric Rodwell. Donna Compton is the captain.

Newton Abbot is a thriving duplicate bridge club with a Spectators are welcome at this mouth-watering event; for

membership of around two hundred. All visitors and new and information, e-mail pdjourdain@hotmail.com. If you cannot

improving players will be made most welcome, and should contact get there, you can watch every board and every table at