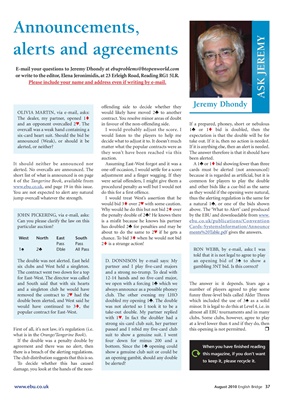 offending side to decide whether they Jeremy Dhondy

OLIVIA MARTIN, via e-mail, asks: would likely have moved 2® to another

The dealer, my partner, opened 1t contract. You resolve minor areas of doubt

and an opponent overcalled 2™. The in favour of the non-offending side. If a prepared, phoney, short or nebulous

overcall was a weak hand containing a I would probably adjust the score. I 1® or 1t bid is doubled, then the

six-card heart suit. Should the bid be would listen to the players to help me expectation is that the double will be for

announced (Weak), or should it be decide what to adjust it to. It doesn’t much take out. If it is, then no action is needed.

alerted, or neither? matter what the popular contracts were as If it is anything else, then an alert is needed.

alerted. No overcalls are announced. The one-off occasion, I would settle for a score cards must be alerted (not announced)

short list of what is announced is on page adjustment and a finger wagging. If they because it is regarded as artificial, but it is

4 of the Tangerine Book, available from were serial offenders, I might give them a common for players to play the double

www.ebu.co.uk, and page 19 in this issue. procedural penalty as well but I would not and other bids like a cue-bid as the same

You are not expected to alert any natural do this for a first offence. as they would if the opening were natural,

jump overcall whatever the strength. I would treat West’s assertion that he thus the alerting regulation is the same for

would bid 3t over 2™ with some caution. a natural 1®, or one of the bids shown

Why would he do this but not bid 2t over above. The ‘What to Alert’ card produced

JOHN PICKERING, via e-mail, asks: the penalty double of 2®? He knows there by the EBU and downloadable from www.

Can you please clarify the law on this is a misfit because he knows his partner ebu.co.uk/publications/Convention

particular auction? has doubled 2® for penalties and may be Cards-SystemsInformation/Announce

about to do the same to 2™ if he gets a ments%20Table.pdf gives the answers.

West North East South chance. To bid 3t when he would not bid

told that it is not legal to agree to play

The double was not alerted. East held D. DONNISON by e-mail says: My an opening bid of 3´ to show a

six clubs and West held a singleton. partner and I play five-card majors gambling 3NT bid. Is this correct?

The contract went two down for a top and a strong no-trump. To deal with

for East-West. The director was called 12-14 hands and no five-card major,

and South said that with six hearts we open with a forcing 1® which we The answer is: it depends. Years ago a

removed the contract to 2™ had the club. The other evening my LHO funny three-level bids called Alder Threes

double been alerted, and West said he doubled my opening 1®. The double which included the use of 3´ as a solid

would have continued to 3t, the was not alerted so I took it to be a minor. It is legal to do this at Level 4, i.e. in

popular contract for East-West. take-out double. My partner replied almost all EBU tournaments and in many

with 1™. In fact the doubler had a clubs. Some clubs, however, agree to play

strong six-card club suit, her partner at a level lower than 4 and if they do, then

First of all, it’s not law, it’s regulation (i.e. passed and I rebid my five-card club this opening is not permitted. r

what is in the Orange/Tangerine Book). suit to show a genuine suit. I went

agreement and there was no alert, then bottom. Since the 1® opening could When you have finished reading

there is a breach of the alerting regulations. show a genuine club suit or could be this magazine, if you don’t want

The club distribution suggests that this is so. an opening gambit, should any double

to keep it, please recycle it.

To decide whether this has caused be alerted?

damage, you look at the hands of the non-