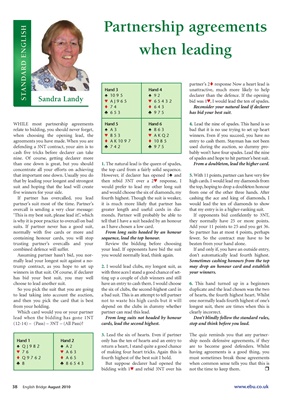 WHILE most partnership agreements Hand 5 Hand 6 4. Lead the nine of spades. This hand is so

relate to bidding, you should never forget, ´ A3 ´ 863 bad that it is no use trying to set up heart

when choosing the opening lead, the ™ 853 ™ AKQ2 winners. Even if you succeed, you have no

nine. Of course, getting declarer more of spades and hope to hit partner’s best suit.

than one down is great, but you should 1. The natural lead is the queen of spades, From a doubleton, lead the higher card.

concentrate all your efforts on achieving the top card from a fairly solid sequence.

that important one down. Usually you do However, if declarer has opened 1´ and 5. With 11 points, partner can have very few

that by leading your longest and strongest then rebid 3NT over a 2™ response, I high cards. I would lead my diamonds from

suit and hoping that the lead will create would prefer to lead my other long suit the top, hoping to drop a doubleton honour

five winners for your side. and would choose the six of diamonds, my from one of the other three hands. After

If partner has overcalled, you lead fourth highest. Though the suit is weaker, cashing the ace and king of diamonds, I

partner’s suit most of the time. Partner’s it is much more likely that partner has would lead the ten of diamonds to show

overcall is sending a very clear message: greater length and useful cards in dia- that my entry is in a higher-ranking suit.

‘This is my best suit, please lead it!’, which monds. Partner will probably be able to If opponents bid confidently to 3NT,

is why it is poor practice to overcall on bad tell that I have a suit headed by an honour they normally have 25 or more points.

normally with five cards or more and From long suits headed by an honour So partner has at most 4 points, perhaps

containing honour cards, you will stop sequence, lead the top honour. fewer. So the contract may have to be

trusting partner’s overcalls and your Review the bidding before choosing beaten from your hand alone.

combined defence will suffer. your lead. If opponents have bid the suit If and only if, you have an outside entry,

trump contract, as you hope to set up 2. I would lead clubs, my longest suit, as may drop an honour card and establish

winners in that suit. Of course, if declarer with three aces I stand a good chance of set- your winners.

has bid your best suit, you may well ting up a couple of club winners and still

choose to lead another suit. have an entry to cash them. I would choose 6. This hand turned up in a beginners

So you pick the suit that you are going the six of clubs, the second-highest card in duplicate and the lead chosen was the two

to lead taking into account the auction, a bad suit. This is an attempt to tell partner of hearts, the fourth highest heart. Whilst

from your holding. depend on the clubs in dummy whether longest suit, there are times when this is

Which card would you or your partner partner can read this lead. clearly incorrect.

lead when the bidding has gone 1NT From long suits not headed by honour Don’t blindly follow the standard rules,

3. Lead the six of hearts. Even if partner The quiz reminds you that any partner-

Hand 1 Hand 2 only has the ten of hearts and an entry to ship needs defensive agreements, if they

´ QJ982 ´ A2 return a heart, I stand quite a good chance are to become good defenders. Whilst

™ 76 ™ A63 of making four heart tricks. Again this is having agreements is a good thing, you

t Q9762 t A65 fourth highest of the best suit I hold. must sometimes break those agreements

bidding with 1™ and rebid 3NT over his not the time to keep them. r