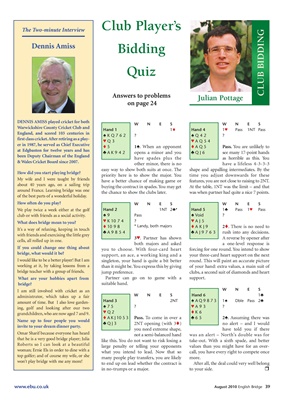 first class cricket. After retiring as a play- ™Q3 ™AQ54

been Deputy Chairman of the England have spades plus the as horrible as this. You

easy way to show both suits at once. The shape and appalling intermediates. By the

How did you start playing bridge?

priority here is to show the major. You time you adjust downwards for these

My wife and I were taught by friends have a better chance of making game or features, you are not close to raising to 2NT.

about 40 years ago, on a sailing trip buying the contract in spades. You may get At the table, 1NT was the limit – and that

around France. Learning bridge was one the chance to show the clubs later. was when partner had quite a nice 7 points.

of the best parts of a wonderful holiday.

club or with friends as a social activity. ´9 Pass ´ Void ?

It’s a way of relaxing, keeping in touch

with friends and exercising the little grey

3™. Partner has shown A reverse by opener after

cells, all rolled up in one.

both majors and asked a one-level response is

If you could change one thing about you to choose. With four-card heart forcing for one round. You intend to show

bridge, what would it be? support, an ace, a working king and a your three-card heart support on the next

I would like to be a better player! But I am singleton, your hand is quite a bit better round. This will paint an accurate picture

working at it, by taking lessons from a than it might be. You express this by giving of your hand: extra values, a main suit of

bridge teacher with a group of friends. jump preference. clubs, a second suit of diamonds and heart

What are your hobbies apart from Partner can go on to game with a support.

Name up to four people you would

invite to your dream dinner party.

you need extreme shape, have told you if there

that he is a very good bridge player; Julia like this. You do not want to risk losing a take-out. With a sixth spade, and better

woman; Ernie Els in order to dine with a what you intend to lead. Now that so call, you have every right to compete once

top golfer; and of course my wife, or she many people play transfers, you are likely more.

won’t play bridge with me any more! to end up on lead whether the contract is After all, the deal could very well belong

in no-trumps or a major. to your side. r