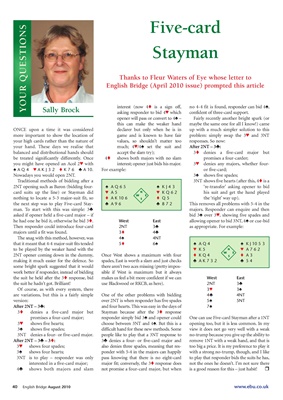 Thanks to Fleur Waters of Eye whose letter to

this can make the weaker hand maybe the same one for all I know!) came

more important to show the location of game and is known to have fair problem: simply swap the 3™ and 3NT

your high cards rather than the nature of values, so shouldn’t matter too responses. So now:

balanced and distributional hands should accept the slam try); 3t denies a five-card major but

be treated significantly differently. Once 4t shows both majors with no slam promises a four-carder;

you might have opened an Acol 2™ with interest; opener just bids his major. 3™ denies any majors, whether four-

Traditional methods of bidding after a 3NT shows five hearts (after this, 4t is a

man. To start with this was simple: 3® majors. Responder can enquire and then

asked if opener held a five-card major – if bid 3´ over 3™, showing five spades and

he had one he bid it, otherwise he bid 3t. West East allowing opener to bid 3NT, 4´ or cue-bid

Then responder could introduce four-card 2NT 3® as appropriate. For example:

The snag with this method, however, was 4´ 4NT

2NT opener coming down in the dummy, Once West shows a maximum with four t KQ4 S t A3

making it much easier for the defence. So spades, East is worth a slam and just checks ® AK732 ® 54

work better if responder, instead of bidding sible if West is maximum but it always

the suit he held after the 3t response, bid makes us feel a bit more confident if we can West East

the suit he hadn’t got. Brilliant! use Blackwood or RKCB, as here). 2NT 3®

are variations, but this is a fairly simple One of the other problems with bidding 4® 4NT

version: over 2NT is when responder has five spades 5´ 5NT

promises a four-card major; responder simply bid 3´ and opener could One can use Five-card Stayman after a 1NT

3™ shows five hearts; choose between 3NT and 4´. But this is a opening too, but it is less common. In my

3´ shows five spades; difficult hand for these new methods. Some view it does not go very well with a weak

3NT denies a four- or five-card major. people like to play that a 3NT response to no-trump because you give up the ability to

3™ shows four spades; also denies three spades, meaning that res- too big a price. It is my preference to play it

3´ shows four hearts; ponder with 5-4 in the majors can happily with a strong no-trump, though, and I like

3NT is to play – responder was only pass knowing that there is no eight-card to play that responder bids the suits he has,

interested in a five-card major; major fit; conversely, the 3t response does not the ones he doesn’t. I’m not sure there

4® shows both majors and slam not promise a four-card major, but when is a good reason for this – just habit! r