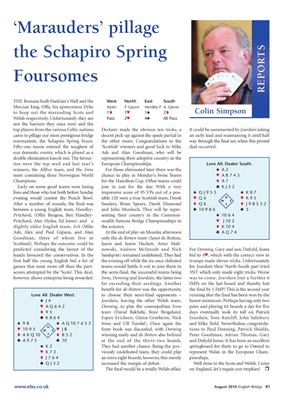 Welsh respectively. Unfortunately they are Pass 2™ 4´ All Pass

not the barriers they once were and the

top players from the various Celtic nations Declarer made the obvious ten tricks, a It could be summarised by Jourdain taking

tournament, the Schapiro Spring Fours. the other room. Congratulations to the way through the final set, when this pivotal

our domestic events, which is played as a Ash and Alan Goodman, who will be

double elimination knock-out. The favour- representing their adoptive country in the

winners, the Allfrey team, and the Irens For those eliminated later there was the ´ A2

Champions. for the Hamilton Cup. Other teams could t A7

Early on some good teams were losing join in just for the day. With a very ® KJ32

Ash, Alex and Paul Gipson, and Alan At the end of play on Monday afternoon ® AQ74

Goodman, three of whom live in only the de Botton team (Janet de Botton,

Scotland). Perhaps the outcome could be Jason and Justin Hackett, Artur Mali-

predicted considering the layout of the nowski, Andrew McIntosh and Nick For Denning, Gary and son, Dafydd, Jones

hands favoured the conservatives. In the Sandqvist) remained undefeated. They had bid to 4™, which with the correct view in

first half the young English bid a lot of the evening off while the six once-defeated trumps made eleven tricks. Unfortunately

scores attempted by the ‘Scots’. This deal, the semi-final, the successful teams being 3NT which only made eight tricks. Worse

however, shows enterprise being rewarded: Irens, Denning and Jourdain, the latter two was to come. Jourdain lost a further 6

far exceeding their seedings. Another IMPs on the last board and thereby lost

benefit for de Botton was the opportunity the final by 1 IMP! This is the second year

Love All. Dealer West. to choose their semi-final opponents – running that the final has been won by the

´ J4 Jourdain, leaving the other Welsh team, barest minimum. Perhaps having only two

™ AQ642 Denning, to play the cosmopolitan Irens pairs and playing 64 boards a day for five

´ K2 They had another chance. Being the pre - springboard for them to go to Ostend to

™ K73 viously undefeated team, they could play represent Wales in the European Cham-

t J764 an extra eight boards; however, this merely pionships.

® QJ32 increased the margin of defeat. Well done to the Scots and Welsh. Come

The final would be a totally Welsh affair. on England, let's regain our trophies! r