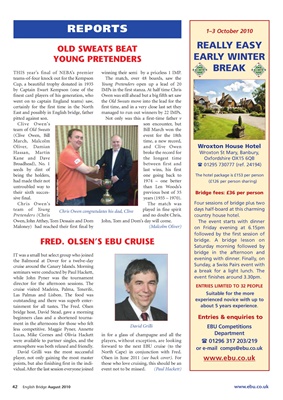 THIS year’s final of NEBA’s premier winning their semi by a priceless 1 IMP.

teams-of-four knock out for the Kempson The match, over 48 boards, saw the

Cup, a beautiful trophy donated in 1935 Young Pretenders open up a lead of 20

by Captain Ewart Kempson (one of the IMPs in the first stanza. At half time Chris

finest card players of his generation, who Owen was still ahead but a big fifth set saw

went on to captain England teams) saw, the Old Sweats move into the lead for the

certainly for the first time in the North first time, and in a very close last set they

East and possibly in English bridge, father managed to run out winners by 22 IMPs.

pitted against son. Not only was this a first-time father v

seeds by dint of last wins, his first

being the holders, one going back to The hotel package is £153 per person

untroubled way to than Len Woods’s

their sixth succes- previous best of 35 Bridge fees: £36 per person

Maloney) had reached their first final by (Malcolm Oliver) on Friday evening at 6.15pm

followed by the first session of

bridge. A bridge lesson on

bridge in the afternoon and

IT was a small but select group who joined

the Balmoral at Dover for a twelve-day evening with dinner. Finally, on

cruise around the Canary Islands. Morning Sunday, a Swiss Pairs event with

seminars were conducted by Paul Hackett, a break for a light lunch. The

while John Pyner was the tournament event finishes around 3.30pm.

director for the afternoon sessions. The

Las Palmas and Lisbon. The food was Suitable for the more

outstanding and there was superb enter- experienced novice with up to

tainment for all tastes. The Fred. Olsen about 5 years experience.

beginners class and a shortened tourna- Entries & enquiries to

ment in the afternoons for those who felt

Lucas, Mike Cornes and Olivia Hackett in for a glass of champagne and all the Department

atmosphere was both relaxed and friendly. forward to the next EBU cruise (to the or e-mail comps@ebu.co.uk

David Grilli was the most successful North Cape) in conjunction with Fred.

player, not only gaining the most master Olsen in June 2011 (see back cover). For www.ebu.co.uk

points, but also finishing first in the indi- those who love cruising, this should be an

vidual. After the last session everyone joined event not to be missed. (Paul Hackett)