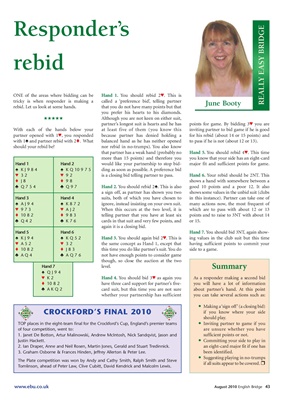 ONE of the areas where bidding can be Hand 1. You should rebid 2™. This is

tricky is when responder is making a called a ‘preference bid’, telling partner

rebid. Let us look at some hands. that you do not have many points but that

you prefer his hearts to his diamonds.

HHHHH Although you are not keen on either suit,

partner’s longest suit is hearts and he has points for game. By bidding 3™ you are

partner opened with 1™, you responded because partner has denied holding a for his rebid (about 14 or 15 points) and

with 1´ and partner rebid with 2t. What balanced hand as he has neither opened to pass if he is not (about 12 or 13).

should your rebid be? nor rebid in no-trumps). You also know

that partner has a weak hand (probably no Hand 5. You should rebid 4™. This time

Hand 1 Hand 2 would like your partnership to stop bid- major fit and sufficient points for game.

t J8 t 98 shows a hand with somewhere between a

a sign off, as partner has shown you two shows some values in the unbid suit (clubs

Hand 3 Hand 4 suits, both of which you have chosen to in this instance). Partner can take one of

´ AJ94 ´ K872 ignore, instead insisting on your own suit. many actions now, the most frequent of

again it is a closing bid.

™ A52 ™ 32 the same concept as Hand 1, except that having sufficient points to commit your

® AQ4 ® AQ76 not have enough points to consider game

though, so close the auction at the two

™ K2 Hand 4. You should bid 3™ as again you As a responder making a second bid

® AKQ2 card suit, but this time you are not sure about partner’s hand. At this point

whether your partnership has sufficient you can take several actions such as:

CROCKFORD’S FINAL 2010 if you know where your side

TOP places in the eight-team final for the Crockford’s Cup, England’s premier teams • Inviting partner to game if you

of four competition, went to: are unsure whether you have

Justin Hackett. • Committing your side to play in

2. Ian Draper, Anne and Neil Rosen, Martin Jones, Gerald and Stuart Tredinnick. an eight-card major fit if one has

The Plate competition was won by Andy and Cathy Smith, Ralph Smith and Steve

if all suits appear to be covered. r