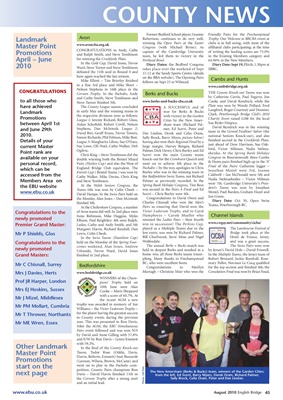 winning the Open Pairs at the Easter

Trophy. Our Welcome to BBCBA event at

clubs is in full swing, with most of the

Congress (with Michael Byrne). As affiliated clubs participating; at the time

captain of the Cambridge University of writing the leading scores are 75.0%

Promotions and Ralph Smith, and Steve Tomlinson team, he led them to victory in the in the Existing Members category and

have again reached the last sixteen. on the BBA website). The Opening Pairs

in a fine 3rd place and Mike Short – www.cambsbridge.org.uk

Nelson Stephens in 16th place in the

CONGRATULATIONS Corwen Trophy. In the Pachabo, Andy Berks and Bucks THE County Knock-out Teams was won

to all those who Steve Turner finished 5th. www.berks-and-bucks-cba.co.uk Cooke and David Kendrick, while the

have achieved The County League season concluded A SUCCESSFUL end of Plate was won by Wendy Pollard, Fred

in early May and the winning teams in year for Berks & Bucks Langford, Roger Courtney and Dominic

the respective divisions were as follows: with victory in the Garden

and June 29th team in the Gerard Faulkner Salver (the

Details of your League 3: Margharita Lihou, Sue O’Hara, having also won their Regional Final by a finished second in the Crockfords Plate,

& Hunts pairs finished high up in the ‘A’

personal record, Pairs (Hockey Cup) and also the West of went on to achieve 4th place in the

Final of the Pairs: Catherine Jagger –

which can be England Bridge Club equivalent. The Pachabo – by the way, apologies to Chris

Burley who was in the winning team in Jonathan Mestel were 3rd, Joanne

Members Area on and Steve Tomlinson. Palmer as previously recorded. In the

Pairs so ensuring that David won the Teams, Peterborough BC.

At the Cheltenham Congress, a number

Congratulations to the of Avon teams did well. In 2nd place were Victor Ludorum Trophy, and to Carol

Margaret Harris, Richard Kendall, Dan played as a Multiple Teams due to the The Lambourne Festival of

Congratulations to the held on the Monday of the Spring Four- Wolfendale. and was a great success.

phing. Many thanks to Finchampstead Robert Brouard, Jackie Rumball, Rose-

Mr C Chisnall, Surrey Bedfordshire Congratulations to Marilyn for the top section and finished 4th; the

WINNERS of the Cham-

trophy was awarded in memory of Jon

Mr T Thrower, Northants for the player having the greatest success

in County events during the previous

Mr ME Wren, Essex year. This was presented to Ron Davis.

After the AGM, the EBU Simultaneous

Other Landmark In the final of the County Knock-out

start on the went on to play in the Pachabo com-

and an initial lead.