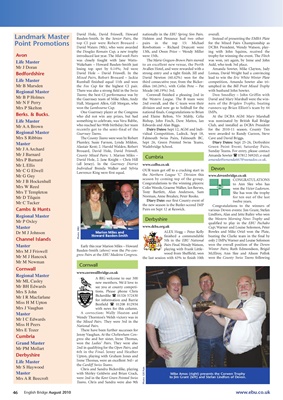 Landmark Master Basden-Smith. In the Senior Pairs, the Helston and Penzance had two other Instead of presenting the EMBA Plate

David Waters (9th), who were awarded

pairs in the top 15: Michael

for the Mixed Pairs Championship as

the Douglas Romain Cup, a new trophy 13th, and Owen Prior – Wendy Miller ing with John Squires, received the

Avon introduced last year. The Mid-week Pairs were 15th. trophy for winning the event. The Flitch

was closely fought with Jane Watts- The Marie Gregson-Brown Pairs moved was won, yet again, by Irene and John

Bedfordshire David Hole – David Friswell. In the strong entry and a tight finish. Jill and Lomas, David Wright had a convincing

Mr B Marsden the Fox Cup for the highest CI pair. dikes (60.26%), with Colin Pote – Pat umphed in the Bill Pratt Mixed Trophy

Regional Master There was also a strong field in the Swiss Meade (60.19%) 3rd. with husband John Sowter.

Teams; the best CI performance was by Cornwall finished a pleasing 2nd in Don Smedley – John Griffin with

Mr B P Holmes the Guernsey team of Mike Allen, Andy the Western League. The B team were David and Mary Marshall were the win-

Mrs P Skelton won the Lambourne Cup. division and now go to Solihull for the runners-up Brian Elliott’s team by 44

One Guernsey player at the Congress national finals. Congratulations to Brian IMPs.

Berks. & Bucks. who did not win any prizes, but had and Elaine Relton, Viv Mably, Celia At the DCBA AGM Mary Marshall

Mr A A Brown who reached her 90th birthday; her team Edwards and Alan Biggs. Club, and installed as DCBA President

Mr L Ellis (all Jersey). In the Guernsey District www.ccdba.co.uk

OUR team got off to a cracking start in Devon

season by coming top of the group. CONGRATULATIONS

Mr J B Hockenhull Congratulations to the winning players: to Ann Slee who has

Mr P Oxley qualified to play in the EBU Pachabo

Channel Islands 5th in the EBU National only 2 IMPs; Warner and Louise Solomon

Regional Master A BIG welcome to our 300

for information and Barrie

Mrs J Vaughan with news for this column.

Master A correction: Wally Heaton and

Wendy Thornton’s Welsh victory was in

Mr I C Edwards the Mixed Pairs. They were 3rd in the

Mrs E Tozer There have been further successes for

Jenny Vaughan. At the Cheltenham Con-

Cumbria gress she and her sister, Irene Thomas,

Grand Master won the Ladies’ Pairs. They were also

Mr PM Mollart 2nd in qualifying for the Open Pairs, and

6th in the Final. Jenny and Heather

Life Master Irene Thomas, were an excellent 3rd= at

Mrs A R Beecroft were 2nd in the Kent Green Pointed Swiss to Jim Grant (left) and Stefan Lindfors of Devon.