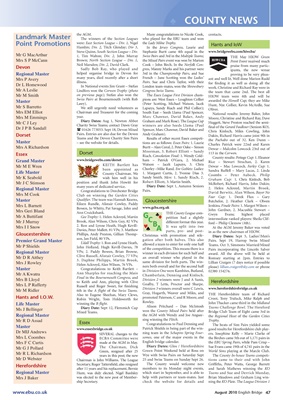 the AGM. Many congratulations to Nicole Cook, contacts.

In the Jersey Congress, Laurie and

Devon Sadly Bob Ray, who played and gress, Manny Marks and his partner were ipants, the new venue

Regional Master helped organise bridge in Devon for 3rd in the Championship Pairs, and Sue proving to be very pleas-

illness. Pairs. Sue and Chris Taylor, with their for finding it as well as doing all the

Mr A Leslie Lindfors won the Corwen Trophy (photo Congress Swiss Teams. the team that came 2nd. The best all

Mr M Smith on previous page); Stefan also won the The Essex League First Division cham- HIOW team were 4th and will be

Swiss Pairs at Bournemouth (with Rob pions are: West Essex – Loughton Collier awarded the Howell Cup; they are Mike

Teams and the Devon Charity Sim Pairs Results of other recent Essex competi- the Pachabo out of 32. Ken Dunn –

Master – see the website for details. tions are as follows: Essex Pairs: 1. Laurie Charles Patrick were 22nd and Karen

Mrs I I Snow 2. Ron and Lynne Heath, Hugh Kevill- It was split into two At the AGM Jeremy Baker was voted

Davies, Peter Mallett. 81 VPs; 3. Matthew parts, pre- and post- in as the new chairman of HIOW.

son, Jan Field, 80 VPs. gation after both halves. This also

allowed a team to enter for only one half Teams. Oct 3, Simmons Married/Mixed

Mr P Shields John Holland, Hugh Kevill-Davies, 78 of the competition. This means there is a Pairs incorporating the Lincoln Salver

Regional Master VPs; 2. Paddy Bowen, Brian Browse, winner in each division for each half and award. All the above will be held at

ners both overall and for the second half please) lillian.craigen@sky.com or phone

Mr A Kwatra Ann Sharples for reaching the Main

Final in the Bournemouth Congress, and

Mrs B Lloyd to Keith and Ann, playing with Clive

Division 2 winners were J and A Sanis,

Russell and Roger Sweet, for finishing

Mr M Ridler 6th in the A flight of the Swiss Teams.

Gray, Hogarth, Weaver and Miles, and THE Herefordshire team of Richard

Life Master winning the B flight.

Master www.essexbridge.co.uk Patrick Shields in being part of the win- good results for Herefordshire club play-

Mrs L Coombes ECBA Committee were somes, one of the major events in the the Birches came 5th out of 1,171 pairs in

Mrs F C Curtis made at the AGM in May. English bridge calendar. the EBU Spring Pairs, while Pam Crisp –

Mr D Webster Chairman is John Williams. The League 25 and Swiss Teams on Sunday Sept 26. tions came to their end with John

after 11 years and his replacement, Bernie and Sarah Mathews winning the KO

Regional Master Hunt, was duly elected. Nigel Bardsley which start in September, and is able to Teams and Sue and Derrick Munday,

Mrs J Baker was elected to the new post of Member- help with partners or team-mates. Just Brian Meadows and Graham Ling win-

ship Secretary. check the website for details and ning the KO Plate. The League Division 1