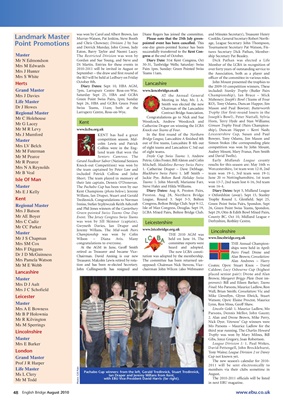 was won by Carol and Albert Brown, Ian Diane Rogers has joined the committee. and Minutes Secretary), Treasurer Henry

pointed event has been cancelled. This

one-day green-pointed licence has been

Master The Restricted Divi sion was won by gress at the end of October. ship Secretary Pat Beasley.

Mrs M Edwards Di Martin. Entries for these events in 30-31, Tunbridge Wells; Saturday: Swiss Member of the LCBA in recognition of

2010-2011 will be invited in August or Pairs 1pm. Sunday: Green Pointed Swiss over forty years of outstanding service to

Mrs J Hunter September – the draw and first round of Teams 11am. the Association, both as a player and

Mrs S White the KO will be held at Ledbury on Friday officer of the committee in various roles.

Dr J Howes Swiss Teams, 11am; both at the Chairman of the Lancashire Mason and Paul Bowyer; Butterworth

Ms J Mumford KENT has had a great In the first round of the Northern Leicestershire Cup, Susan and Paul

Master out of five teams, Lancashire B 4th out Simon Stokes (the corresponding plate

Mrs LV Belch Collins were in the Eng- of eight teams and Lancashire C 3rd out competition was won by John Mount,

Knock-out Competition) was won by Mitchell. Madeline Berney Swiss Pairs: results for this season are: May 16th vs

Master The Pachabo Cup has been won by our Steve Haley and Hilda Williams. won 16-4.

and Phil Jones winners of the Canterbury

Championship was won by Colin THE 2010 AGM was

Mrs SM Cox congratulations to everyone. committee reports were THE Annual Champion-

At the AGM in June, Geoff Smith heard and adopted. ships were held in April:

Grand Master Cup not known yet.

Prof J R Harper 2011 will be sent electronically to

Life Master members via their clubs sometime in

in next EBU magazine.