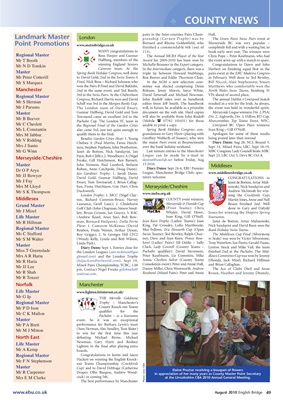 Bernard and Rhona Goldenfield, who

finished a commendable 6th (out of

Merseyside BC was very popular –

MANY congratulations to 113). book early next year. The winners were

Regional Master Ross Harper and Gunnar The Annual MCBA Player of the Year Chris Pope – Peter Kaufmann, who had

Mr T Booth Hallberg, members of the Award for 2009-2010 has been won by the event sewn up with a match to spare.

Camrose team. At the In the Intermediate category, there was a Herbert on finishing equal first in the

won the Pairs B Final and David Bakhshi, mittee was elected comprising Denis Matthews who comfortably won the

Regional Master 3rd in the Swiss Pairs. At the Cheltenham David Tattersall and Michael Newman. VPs ahead of second place.

Mr S Herman Schiff was 3rd in the Morgan Banks Cup. editor from Jeff Smith. The handbook resulted in a win for the Irish. As always,

Mr J Parsons The London team of David Ewart, will, in future, be available as a printable the event was held in wonderful spirit.

Townsend came an excellent 3rd in the will also be available from John Rudolf Div. 2, Aigburth; Div. 3, Hilbre; KO Cup,

Mr C Cheslett the Regional Final of the Garden Cities unable to print a copy. Liverpool BC Open Pairs winners:

Mrs M Jabbar qualify them to the final. gratulations to Gary Hyett (playing with Apologies for some of these results

Master event. So it was an exceptional

to win for the first time this year

Life Master Lighton in the final after playing extra

The best performance by Manchester