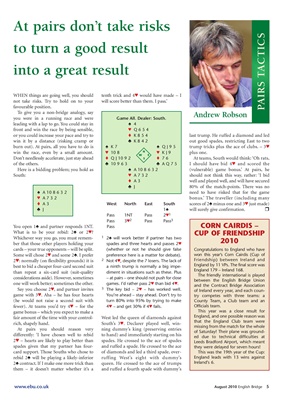 to turn a good result

into a great result

WHEN things are going well, you should tenth trick and 4™ would have made – I

not take risks. Try to hold on to your will score better than them. I pass.’

To give you a non-bridge analogy, say

you were in a running race and were Game All. Dealer: South.

leading with a lap to go. You could stay in ´ 4

front and win the race by being sensible, ™ Q654

or you could increase your pace and try to t K854 last trump. He ruffed a diamond and led

win it by a distance (risking cramp or ® K842 out good spades, restricting East to two

t A3 well and played well, and will have secured

™ A732 bonus.’ The traveller (including many

® J 1´ will surely give confirmation. r

Whichever way you go, you must remem- 1 2´ will work better if partner has two

cards – your true opponents – will be split. (whether or not he should give false Congratulations to England who have

Some will chose 2™ and some 2´. I prefer preference here is a matter for debate). won this year’s Corn Cairdis (Cup of

2™: normally (on flexibility grounds) it is 2 Not 4™, despite the 7 losers. The lack of Friendship) between Ireland and

best to bid a cheaper four-card second suit a ninth trump is normally a big impe- England by 11 VPs. The final score was

than repeat a six-card suit (suit-quality diment in situations such as these. Plus England 179 – Ireland 168.

The friendly international is played

considerations aside). However, sometimes – at pairs – one should not push for close

between the English Bridge Union

one will work better; sometimes the other. games. I’d rather pass 2™ than bid 4™. and the Contract Bridge Association

Say you choose 2™, and partner invites 3 The key bid – 2™ – has worked well. of Ireland every year, and each coun-

game with 3™. Aha – he has four hearts You’re ahead – stay ahead. Don’t try to try competes with three teams: a

(he would not raise a second suit with turn 80% into 95% by trying to make County Team, a Club team and an

fair amount of the time with your control- West led the queen of diamonds against England, and one possible reason was

missing from the match for the whole

of Saturday! Their plane was ground-

differently: ‘I have chosen well to rebid to hand) and immediately starting on his ed due to technical difficulties at

2™ – hearts are likely to play better than spades. He crossed to the ace of spades Leeds Bradford Airport, which meant

spades given that my partner has four- and ruffed a spade. He crossed to the ace they were delayed for seven hours!

card support. Those Souths who chose to of diamonds and led a third spade, over- This was the 19th year of the Cup:

2´ contract. If I make one more trick than queen. He crossed to the ace of trumps Ireland’s 6.