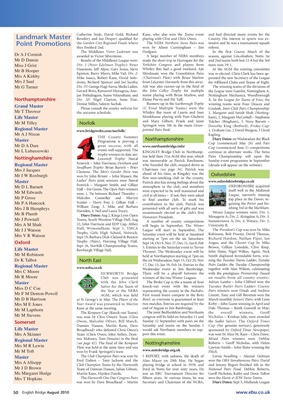 Catherine Seale, David Gold, Richard Kane, who also won the Teams event and had directed many events for the

Landmark Master Bowdery and Ian Draper) qualified for playing with Clive and Chris Owen. County. His interest in sports was ex-

The NEBA Northern Swiss Pairs was

tensive and he was a tournament squash

Mr D Dansie Results of the Middlesex League were: made the short trip to Harrogate for the and 2nd teams both lost 12-8 but the 3rd

Mrs J Saul mons, Richard Spencer and Joe Jacobs; from Leicester (formerly from this area). for Affiliated Clubs and Teams of Eight.

Mr G Turner Div. 3V: George Hagi-Savva, Sheila Laikin, Ajit was also runner-up in the final of The winning teams of the divisions of

Master Programme is proving a

Cup (commenced May 26) and Farr

trophy winners to date are: ton held their 21st AGM this year, which Pairs Championship will open the

Regional Master who founded the club, stepped down as (details will appear on the website).

Mrs J Jacques Clemens. The Men’s Gender Pairs was ahead of his time, as Kingsley was the Oxfordshire

atmosphere in the club, and members

civil at all times – if not, they were asked

Mr P Gross Malcolm Connolley and Mervyn to find another club. To mark his top place in the Dawes, re-

Mr P A Hancock Scutter – Harry Fox; 2. Gillian Hall – contribution to the club, Patrick was gaining the Porter and fin-

William Zang; 3. Mike and Barbara ishing 3rd in the Markham.

presented with all sorts of gifts and was

Mrs A M Shah 22, John Harrison and EDP Cup, Abbey will begin in September. The Winter University B.

Mr J J Watson League will start in September, The

Mr R Moore Club was presented winners of the two Winter Leagues. on results from all county events).

Salver for the Team of knock-out event with the winners Tuesday Butler Pairs Ladder. County

Miss D C Coe representing the county in the Pachabo. Pairs winners were Dinah and Andrew

the Year at the NEBA

Mr F M Denton-Powell AGM, which was held First round losers compete in the Betts Lintott. Tony and Gill Brereton won the

Mr D B Harrison at St George’s in May. The Player of the Bowl, so everyone is guaranteed at least March monthly Seniors’ Pairs, with Lynn

Kane at the same meeting. end of August to Jim Bainbridge. Dale Thomas – Keith Goswell in May;

Mr M Stevens was won by Clive Owen’s Team (Clive congress will be held on Saturday 11 and Nicholas – Krishan Jalie, were awarded

(see page 42). The final of the Kempson Nottinghamshire Roberts – Geoff Nicholas, with Helen

Master The Club Champion Pairs was won by I REPORT, with sadness, the death of Lorna Swadling – Alastair Gidman

Fred Dalton – Tony Jackson and the Alan Macey on 20th May. He began won the OBA Simultaneous Pairs. David

Mrs A Allsopp Club Champion Teams by the Hurworth playing bridge at school in 1939, and and Jeremy Bygott finished 4th in the