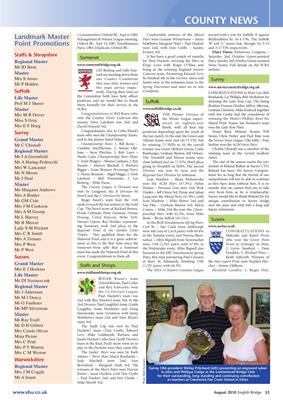 v Leicestershire, Oxford BC. Sept 6, OBA Comfortable winners of the Mixed started with a win for Suffolk ‘A’ against

were 2nd, with Dan Crofts – Sandra

Mr ID Biott being in the winning England Seniors website.

Mrs S Amos our County Commit tee he finished 4th in the Corwen. Jason and Surrey

Suffolk tively. During their time on Crockfords. CONGRATULATIONS to Peter Lee, Bob

the Committee both have held officer Rowlands, Liz Phillips, Bob McRobert for

Life Master positions and we would like to thank

them formally for their service to the finalists, Frances Hinden, Jeffrey Allerton,

Congratulations also to Colin Flood’s positions depending upon the result of Stuart Reid, Melanie Swann, Will

Surrey team who won the Championship Teams, the last match. In the end, the Green and Swain, Chris Huber and Paul Bate won

Grand Master and to the players listed below. Allnutt teams were tied on 73 VPs, but the Novice Team League. Ulla Adilz – Pam

Ms A Haring-Pedrocchi 1. Andy Ridgers – Sheena Lanham, 2. Ray close behind tied on 71 VPs, third place The end of the season marks the reti-

Mr N Moore 1. Heinz Brunsch – Nigel Maggs, 2. Dave Regional East Division by Johnston. tions’ for so long that the format of our

Master The County League A Division was Mason – Norman Less were 2nd, Rick wonder that we cannot find any to take

Ms Margaret Andrews won by Langport, the B Division by Hanley – Jeff Orton 3rd. Penny and Julian over from him, as he is irreplaceable.

Mrs A Binder Yeovil and the C Division by Street. Lang won the Mixed Pairs (61.9%), with Surrey would like to thank Roland for his

seeds to reach the last sixteen in the Gold Sue Flin – Graham Beeton 3rd. Marie over the years and wish him a long and

Mr B Mercer In the BGB Simultaneous Spring Pairs,

Lady S M Prickett Regional Final of the Garden Cities were 4th (out of 1,614 pairs) with 69.6% CONGRATULATIONS to

Mrs C R Smith Trophy. This qualified them for the in the Tuesday event, and Norma Shan- Malcolm and Karen Pryor

Mr P West team has made the National Final of this featured in the EBU Simultaneous Spring Franklin; 3. Michael Prior –

Sussex event. Congratulations to them all. Pairs, this time partnering Paul Croxson Keith Ashcroft. Winners of

2nd with Roy Martin’s team 3rd. In the

Master Simmonds) were victorious with Jenny

Mrs C Pratt team in the final. Paul’s team went on to

Mrs P T Warren play in the Pachabo were they came 8th.

for their outstanding, long standing and continuing contribution