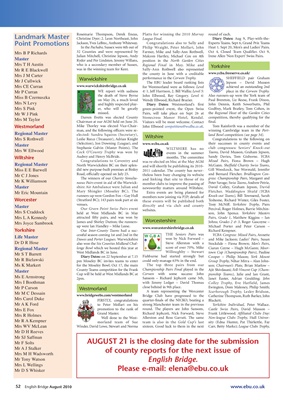 Rosemarie Thompson, Derek Eneas, Platts for winning the 2010 Murray round of each.

In the Pachabo, Sussex were 6th out of

Congratulations also to Sally and

Master Ryder and Per Lindsten. Jeremy Willans, position in the North Garden Cities

Mrs T H Austin who is a secondary member of Sussex, Regional Final in May. Mike and Yorkshire

the county in June with a creditable www.ycba.freeserve.co.uk/

Miss B Czernuszka on May 26, a much loved Paul Brereton, Liz Reese, Frank Dixon,

Mr W J Pink missed. Pairs, will take place on Sept 26 at the Regional Heat of the Garden Cities

Mrs M Taylor Chairman at our AGM held on June 20. Visitors will be most welcome. Contact final.

Westmorland Mike Thorley was elected Vice-Chair- John Ellwood competitions@wcdba.co.uk. Tom Rainforth was a member of the

man, and the following officers were re- winning Cambridge team in the Port-

Wiltshire Congratulations to the following on

(Selection), Jon Downing (League), and www.wcba.co.uk their successes in county events and

Congratulations to Coventry and was re-elected en bloc at the May AGM Mixed Pairs, Fiona Brown – Hugh

Regional Master North Warwickshire BC on their splen- and will shortly be publishing its 2010- McGann. Sheffield Charity Swiss Teams,

The winners of our Charity Simulta- and linking that site to those of its gress: Championship Pairs, Margaret and

member clubs to improve the passing of

Worcester (Stratford BC); 143 pairs took part at six these events will be published both Teshome, Richard Winter, Giles Foster,

Yorkshire Our Inter-County Teams had a suc- Richard Kempner.

Regional Master lenge Bowl which we hosted this year at score of over 70%. Mike Ciaran Coyne – Hugh McGann; Moor-

Master Corwen with some success: John

Cup will be held at West Midlands BC at pionship Teams), Julie and Ian Grant,

Mr A K Ford to Peter Mollart on his strong Manchester team in the previous Yorkshire Individual, Peter Wallace.

Mrs E Fox promotion to the rank of round. The players are John Sansom, Castle Swiss Pairs, David Musson –

of county reports for the next issue of