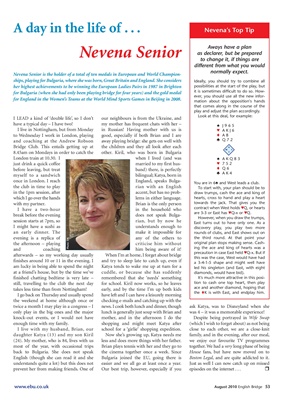 Aways have a plan

Nevena Senior as declarer, but be prepared

to change it, if things are

different from what you would

Nevena Senior is the holder of a total of ten medals in European and World Champion- normally expect.

ships, playing for Bulgaria, where she was born, Great Britain and England. She considers Ideally, you should try to combine all

her highest achievements to be winning the European Ladies Pairs in 1987 in Brighton possibilities at the start of the play, but

for Bulgaria (when she had only been playing bridge for four years) and the gold medal it is sometimes difficult to do so. How-

ever, you should use all the new infor-

for England in the Women’s Teams at the World Mind Sports Games in Beijing in 2008. mation about the opposition's hands

that comes along in the course of the

play and adjust the plan accordingly.

Look at this deal, for example:

I LEAD a kind of ‘double life’, so I don’t our neighbours is from the Ukraine, and

I live in Nottingham, but from Monday in Russian! Having mother with us is ™ AKJ6

to Wednesday I work in London, playing good, especially if both Brian and I are t A8

and coaching at the Andrew Robson away playing bridge: she gets on well with ® Q72

Bridge Club. This entails getting up at the children and they all look after each W

8.45am on Mondays in order to catch the other. Kiril, who was born in Bulgaria S

just drink a quick coffee married to my first hus- ™ 752

before leaving, but treat band) there, is perfectly t Q6

myself to a sandwich bilingual; Katya, born in

once in London. I reach England, speaks Bulga- You are in 6´ and West leads a club.

the club in time to play rian with an English To start with, your plan should be to

in the 1pm session, after accent, but has no prob- draw trumps, cash the ace and king of

which I go over the hands lems in either language. hearts, cross to hand and play a heart

with my partner. Brian is the only person towards the jack. That gives you the

I have a two-hour in the household who contract when West holds ™Q, or hearts

break before the evening does not speak Bulga-

However, when you draw the trumps,

session starts at 7pm, so rian, but by now he East turns out to have only one. As a

I might have a sushi as understands enough to discovery play, you play two more

an early dinner. The make it impossible for rounds of clubs, and East shows out on

evening is a replica of any of the others to the third round. At that point your

and coaching him being aware of it! ing the ace and king of hearts was a

precaution in case East held ™Q-x. But if

afterwards – so my working day usually When I’m at home, I forget about bridge

this was the case, West would have had

am lucky in being able to spend the night Katya tends to wake me up at 6am for a led his singleton (and East, with eight

at a friend’s house, but by the time we’ve cuddle, or because she has suddenly diamonds, would have bid).

still, travelling to the club the next day for school. Kiril now works, so he leaves tion to cash one top heart, then play

takes less time than from Nottingham! early, and by the time I’m up both kids ace and another diamond, hoping that

the tK is with East, and endplay him.

twice a month I may play in a congress – I news. I cook both lunch and dinner, though ask Katya, was to Disneyland when she

only play in the big ones and the major lunch is generally just soup with Brian and was 4 – it was a memorable experience!

knock-out events, or I would not have mother, and in the afternoon I do the Despite being portrayed in Wife Swap

enough time with my family. shopping and might meet Katya after (which I wish to forget about) as not being

I live with my husband, Brian, our school for a ‘girlie’ shopping expedition. close to each other, we are a close-knit

daughter Katya (13) and my son Kiril Now she’s growing up, Katya needs me family, and in the evening, after our meal,

(24). My mother, who is 84, lives with us less and does more things with her father. we enjoy our favourite TV programmes

most of the year, with occasional trips Brian plays tennis with her and they go to together. We had a very long phase of being

back to Bulgaria. She does not speak the cinema together once a week. Since House fans, but have now moved on to

English (though she can read it and she Bulgaria joined the EU, going there is Boston Legal, and are quite addicted to it.

understands quite a lot) but this does not easier and we all go at least once a year. Just as well I can now catch up on missed

prevent her from making friends. One of Our best trip, however, especially if you episodes on the internet . . . r