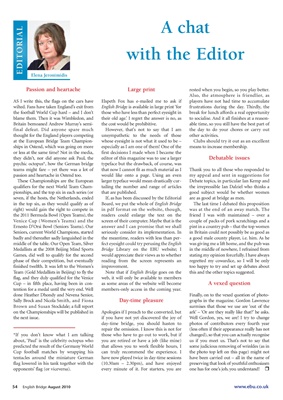 Passion and heartache Large print rested when you begin, so you play better.

Also, the atmos phere is friendlier, as

AS I write this, the flags on the cars have Elspeth Fox has e-mailed me to ask if players have not had time to accumulate

wilted. Fans have taken England’s exit from English Bridge is available in large print ‘for frustrations during the day. Thirdly, the

blame them. Then it was Wimbledon, and their old age.’ I regret the answer is no, as to socialise. And it all finishes at a reason-

Britain bemoaned Andrew Murray’s semi- the cost would be prohibitive. able time, so you still have the best part of

final defeat. Did anyone spare much However, that’s not to say that I am the day to do your chores or carry out

thought for the England players competing unsympathetic to the needs of those other activities.

ships in Ostend, which was going on more especially as I am one of them! One of the means to increase membership.

or less at the same time? Not in the media, first decisions I made when I became the

they didn’t, nor did anyone ask Paul, the editor of this magazine was to use a larger Debatable issues

psychic octopus*, how the German bridge typeface but the drawback, of course, was

passion and heartache in Ostend too. would like onto a page. Using an even my appeal and sent in suggestions for

These Championships are the European larger typeface would mean drastically cur- Debate topics, in particular Ian Kemp and

pionships, and the top six in each series (or that are published. good subject would be whether women

seven, if the hosts, the Netherlands, ended If, as has been discussed by the Editorial are as good at bridge as men.

in the top six, as they would qualify as of Board, we put the whole of English Bridge The last time I debated this proposition

right) would gain the right to compete in in pdf format on the website, though, was at the end of an away match. The

the 2011 Bermuda Bowl (Open Teams), the readers could enlarge the text on the friend I was with maintained – over a

Venice Cup (Women’s Teams) and the screen of their computer. Maybe that is the couple of packs of pork scratchings and a

Ernesto D’Orsi Bowl (Seniors Teams). Our answer and I can promise that we shall pint in a country pub – that the top women

Seniors, current World Champions, started seriously consider its implementation. In in Britain could not possibly be as good as

badly and thereafter sadly languished in the the meantime, readers with less than per- a good male county player, i.e. him. As he

middle of the table. Our Open Team, Silver fect eyesight could try perusing the English was giving me a lift home, and the pub was

Medallists at the 2008 Beijing Mind Sports Bridge Library on the EBU website; I in the middle of nowhere, I refrained from

Games, did well to qualify for the second would appreciate their views as to whether stating my opinion forcefully. I have always

phase of their competition, but eventually reading from the screen represents an regretted my cowardice, so I will be only

finished twelfth. It was left to the Women’s improvement. too happy to try and set up debates about

Team (Gold Medallists in Beijing) to fly the Note that if English Bridge goes on the this and the other topics suggested.

flag, and they duly qualified for the Venice web, it will only be available to members

Cup – in fifth place, having been in con- as some areas of the website will become A vexed question

tention for a medal until the very end. Well members-only access in the coming year.

done Heather Dhondy and Nevena Senior, Finally, on to the vexed question of photo-

Brown and Susan Stockdale; a full report surmises that those we use are ‘out of the

on the Championships will be published in Apologies if I preach to the converted, but ark’ – ‘Or are they really like that?’ he asks.

the next issue. if you have not yet discovered the joy of Well Gordon, yes, we are! I try to change

day-time bridge, you should hasten to photos of contributors every fourth year

repair the omission. I know this is not for (less often if their appearance really has not

*If you don’t know what I am talking those who have to go out to work, but if changed), so that you can actually recognise

about, ‘Paul’ is the celebrity octopus who you are retired or have a job (like mine) us if you meet us. That’s not to say that

predicted the result of the Germany World that allows you to work flexible hours, I some judicious removing of wrinkles (as in

Cup football matches by wrapping his can truly recommend the experience. I the photo top left on this page) might not

flag lowered in his tank together with the (10.30am – 2.30pm), and have enjoyed preserving that look of youthful enthusiasm

opponents’ flag (or viceversa). every minute of it. For starters, you are one has for one’s job, you understand! r