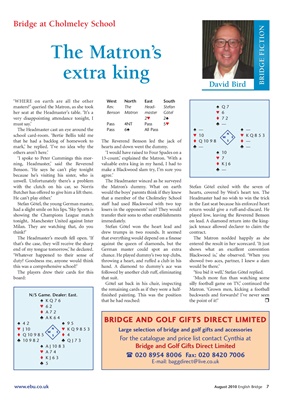 ‘WHERE on earth are all the other West North East South

masters?’ queried the Matron, as she took Rev. The Head- Stefan ´ Q7

her seat at the Headmaster’s table. ‘It’s a Benson Matron master Götel ™ 6

ning, Headmaster,’ said the Reverend valuable extra king in my hand, I had to t KJ6

Benson. ‘He says he can’t play tonight make a Blackwood slam try, I’m sure you ® —

because he’s visiting his sister, who is agree.’

unwell. Unfortunately there’s a problem The Headmaster winced as he surveyed

with the clutch on his car, so Norris the Matron’s dummy. What on earth Stefan Götel exited with the seven of

Butcher has offered to give him a lift there. would the boys’ parents think if they knew hearts, covered by West’s heart ten. The

He can’t play either.’ that a member of the Cholmeley School Headmaster had no wish to win the trick

Stefan Götel, the young German master, staff had used Blackwood with two top in the East seat because his enforced heart

had a slight smile on his lips. ‘Sky Sports is losers in the opponents’ suit? They would return would give a ruff-and-discard. He

tonight, Manchester United against Inter immediately. on lead. A diamond return into the king-

Milan. They are watching that, do you Stefan Götel won the heart lead and jack tenace allowed declarer to claim the

The Headmaster’s mouth fell open. ‘If that everything would depend on a finesse The Matron nodded happily as she

that’s the case, they will receive the sharp against the queen of diamonds, but the entered the result in her scorecard. ‘It just

end of my tongue tomorrow,’ he declared. German master could spot an extra shows what an excellent convention

‘Whatever happened to their sense of chance. He played dummy’s two top clubs, Blackwood is,’ she observed. ‘When you

duty? Goodness me, anyone would think throwing a heart, and ruffed a club in his showed two aces, partner, I knew a slam

this was a comprehensive school!’ hand. A diamond to dummy’s ace was would be there.’

The players drew their cards for this followed by another club ruff, eliminating ‘You bid it well,’ Stefan Götel replied.

board: that suit. ‘Much more fun than watching some

Götel sat back in his chair, inspecting silly football game on TV,’ continued the

the remaining cards as if they were a half- Matron. ‘Grown men, kicking a football