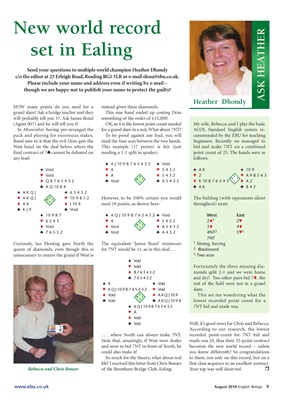 HOW many points do you need for a instead given three diamonds.

grand slam? Ask a bridge teacher and they This one hand ended up costing Drax

In Moonraker, having pre-arranged the for a grand slam in a suit. What about 7NT? ACOL Standard English system re-

pack and playing for enormous stakes, To be proof against any lead, you will commended by the EBU for teaching

Bond sees to it that the evil Drax gets the need the four aces between the two hands. beginners. Recently we managed to

West hand on the deal below, where the This example (17 points) is fair (just bid and make 7NT on a combined

final contract of 7® cannot be defeated on needing a 1-1 split in spades): point count of 25. The hands were as

unnecessary to ensure the grand if West is 3 Two aces

´ K ´ Void rest of the field were not in a grand

According to our research, the lowest

. . . where South can always make 7NT. recorded point-count for 7NT bid and

Note that, amazingly, if West were dealer made was 26, thus their 25-point contract

and were to bid 7NT in front of South, he becomes the new world record – unless

could also make it! you know differently! So congratulations

So much for the theory, what about real to them, not only on this record, but on a

life? I received this letter from Chris Bonser first class sequence to an excellent contract.

Rebecca and Chris Bonser of the Brentham Bridge Club, Ealing: Your top was well deserved. r