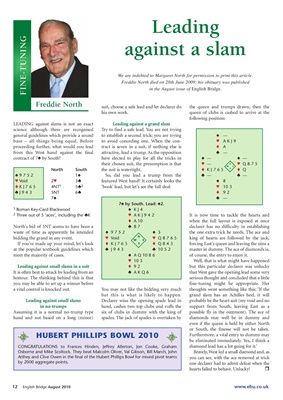 Freddie North suit, choose a safe lead and let declarer do the queen and trumps drawn; then the

his own work. queen of clubs is cashed to arrive at the

science although there are recognised Try to find a safe lead. You are not trying

general guidelines which provide a sound to establish a second trick; you are trying ´ —

base – all things being equal. Before to avoid conceding one. When the con- ™ AKJ9

proceeding further, what would you lead tract is seven in a suit, if nothing else is t A

from this West hand against the final attractive, lead a trump. As the opposition ® —

their chosen suit, the presumption is that ™ — W

t A 10 when the full layout is exposed at once

waste of time as apparently he intended ´ 9752 ´ 3 the one extra trick he needs. The ace and

bidding the grand in any event. ™ Void W E

If you've made up your mind, let's look t KJ765 S t Q843 forcing East's queen and leaving the nine a

honour. The thinking behind this is that serious thought and concluded that a little

you may be able to set up a winner before fine-tuning might be appropriate. Her

a vital control is knocked out. You may not like the bidding very much thoughts went something like this: ‘If the

but this is what is likely to happen. grand slam has an Achilles heel, it will

in no-trumps hand, cashes two top clubs and ruffs the support from South, leaving East as a

Assuming it is a normal no-trump type six of clubs in dummy with the king of possible fly in the ointment). The ace of

hand and not based on a long (minor) spades. The jack of spades is overtaken by diamonds may well be in dummy and

even if the queen is held by either North

or South, the finesse will not be taken.

HUBERT PHILLIPS BOWL 2010 Furthermore, a vital entry to dummy may

be eliminated immediately. Yes, I think a

Atthey and Clive Owen in the final of the Hubert Phillips Bowl for mixed pivot teams you can see, with the ace removed at trick

by 2000 aggregate points. one declarer had to admit defeat when the