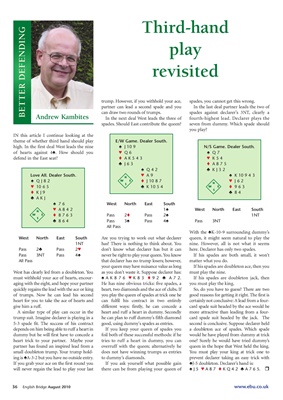 trump. However, if you withhold your ace, spades, you cannot get this wrong.

can draw two rounds of trumps. spades against declarer’s 3NT, clearly a

Andrew Kambites In the next deal West leads the three of fourth-highest lead. Declarer plays the

spades. Should East contribute the queen? seven from dummy. Which spade should

IN this article I continue looking at the

West North East South Are you trying to work out what declarer queen, it might seem natural to play the

1NT has? There is nothing to think about. You nine. However, all is not what it seems

Pass 2® Pass 2™ don't know what declarer has but it can here. Declarer has only two spades.

Pass 3NT Pass 4´ never be right to play your queen. You know If his spades are both small, it won’t

All Pass that declarer has no trump losers; however, matter what you do.

your queen may have nuisance value as long If his spades are doubleton ace, then you

West has clearly led from a doubleton. You as you don't waste it. Suppose declarer has: must play the nine.

aging with the eight, and hope your partner He has nine obvious tricks: five spades, a you must play the king.

quickly regains the lead with the ace or king heart, two diamonds and the ace of clubs. If So, do you have to guess? There are two

of trumps. Now he can lead his second you play the queen of spades at trick one he good reasons for getting it right. The first is

heart for you to take the ace of hearts and can fulfil his contract in two entirely certainly not conclusive: A lead from a four-

give him a ruff. different ways: firstly, he can concede a card spade suit headed by the ace would be

A similar type of play can occur in the heart and ruff a heart in dummy. Secondly more attractive than leading from a four-

trump suit. Imagine declarer is playing in a he can plan to ruff dummy's fifth diamond card spade suit headed by the jack. The

depends on him being able to ruff a heart in If you keep your queen of spades you a doubleton ace of spades. Which spade

dummy but he will first have to concede a foil both of these successful methods: if he would he have played from dummy at trick

heart trick to your partner. Maybe your tries to ruff a heart in dummy, you can one? Surely he would have tried dummy’s

partner has found an inspired lead from a overruff with the queen; alternatively he queen in the hope that West held the king.

small doubleton trump. Your trump hold- does not have winning trumps as entries You must play your king at trick one to

ing is ´A-3-2 but you have no outside entry. to dummy’s diamonds. prevent declarer taking an easy trick with

If you grab your ace on the first round you If you ask yourself what possible gain ´J-5 doubleton. Declarer’s hand is: