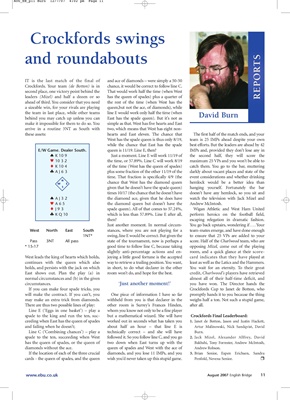 Crockfords. Your team (de Botton) is in chance, it would be correct to follow line C.

second place, one victory point behind the That would work half the time (when West

ahead of third. You consider that you need the rest of the time (when West has the

a sizeable win, for your rivals are playing queen,but not the ace, of diamonds), while

the team in last place, while other teams line E would work only half the time (when

behind you may catch up unless you can East has the spade queen). But it’s not as David Burn

make it impossible for them to do so. You simple as that. West has five hearts and East

arrive in a routine 3NT as South with two, which means that West has eight non-

these assets: hearts and East eleven. The chance that The first half of the match ends, and your

West has the spade queen is thus only 8/19, team is 25 IMPs ahead despite your own

while the chance that East has the spade best efforts. But the leaders are ahead by 42

time. That fraction is specifically 4/9 (the event considerations and whether drinking

S given that he doesn’t have the spade queen) hanging yourself. Fortunately the bar

♠ AJ32 the diamond ace, given that he does have watch the television with Jack Mizel and

♥ A65 the diamond queen but doesn’t have the Andrew McIntosh.

then? escaping relegation in dramatic fashion.

Just another moment. In normal circum- You go back upstairs, wondering if . . . Your

West North East South stances, where you are not playing for a team-mates emerge, and have done enough

1NT* swing, line E would be correct. But given the to ensure that 25 VPs are added to your

Pass 3NT All pass state of the tournament, now is perhaps a score. Half of the Charlwood team, who are

* 15-17 good time to follow line C, because taking opposing Mizel, come out of the playing

slightly anti-percentage actions and en- room, and a quick glance at their score-

West leads the king of hearts which holds, joying a little good fortune is the accepted card indicates that they have played at

continues with the queen which also way to retrieve a trailing position. You want, least as well as the Latics and the Hammers.

holds, and persists with the jack on which in short, to do what declarer in the other You wait for an eternity. To their great

East shows out. Plan the play (a) in room won’t do, and hope for the best. credit, Charlwood’s players have retrieved

normal circumstances and (b) in the given almost all of their half-time deficit, and

circumstances. ‘Just another moment!’ you have won. The Director hands the

If you can make four spade tricks, you Crockfords Cup to Janet de Botton, who

will make the contract. If you can’t, you One piece of information I have so far promptly hands it to you because the thing

may make an extra trick from diamonds. withheld from you is that declarer in the weighs half a ton. Not such a stupid game,

There are thus two possible lines of play: other room is Surrey’s Frances Hinden, after all.

spade to the king and run the ten, suc- but a mathematical wizard. She will have Crockfords Final Leaderboard:

ceeding when East has the queen of spades worked out in seconds what has taken you 1. Janet de Botton, Jason and Justin Hackett,

and failing when he doesn’t; about half an hour – that line E is Artur Malinowski, Nick Sandqvist, David

Line C (‘Combining chances’) – play a technically correct – and she will have Burn.

spade to the ten, succeeding when West followed it. So you follow line C, and you go 2. Jack Mizel, Alexander Allfrey, David

has the queen of spades, or the queen of two down when East turns up with the Bakhshi, Tony Forrester, Andrew McIntosh,

diamonds without the ace. queen of spades and West with the ace of Andrew Robson.

If the location of each of the three crucial diamonds, and you lose 11 IMPs, and you 3. Brian Senior, Espen Erichsen, Sandra

cards - the queen of spades, and the queen wish you’d never taken up this stupid game. Penfold, Nevena Senior.