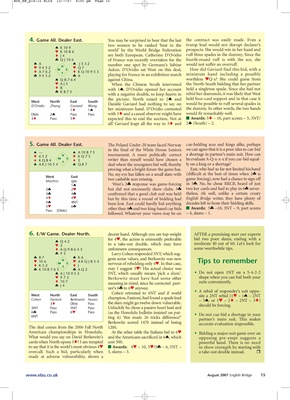 4. Game All. Dealer East. You may be surprised to hear that the last the contract was easily made. Even a

♥ K 10 8 6 world’ by the World Bridge Federation prospects. She would win in her hand and

♦ J4 are both European. Catherine D'Ovidio ruff three spades in the dummy. Since the

♣ Q J 10 6 of France was recently overtaken for the fourth-round ruff is with the ace, she

♠ A ♠ J532 number one spot by Germany’s Sabine would not suffer an overruff.

♦ 8 with 1♠, D’Ovidio opened her account held a singleton spade. Since she had not

with a negative double, to keep hearts in rebid her diamonds, it was likely that West

the picture. North raised to 2♠ and held four-card support and in that case it

1♦ 1♠ her minimum hand. D’Ovidio contested the dummy. In other words, the two hands

Dble 2♠ Pass Pass with 3♦ and a casual observer might have would fit remarkably well.

♥ 652 N ♥ KQ73 tournament. A more politically correct a shortage in partner’s main suit. How can

proving what a bright future the game has. East, who had so far not limited his hand

No, my eye has fallen on a small slam with (difficult at the best of times when 2♣ is

3♣ 4♣ confirmed that a good club suit was held theless. Ah well, unlike a certain crusty

4♦ 4♥ but by this time a round of bidding had English Bridge writer, they have plenty of

4♠ 4NT been lost. East could hardly bid anything decades left to hone their bidding skills.

6. E/W Game. Dealer North. decent hand. Although you are top-weight AFTER a promising start our experts

for 4♥, the action is eminently preferable bid two poor slams, ending with a

nervous of rebidding only 4♥. In that case, Tips to remember

♦ 10 7 meaning in mind, since he corrected part- suits conveniently.

3♦ Dble Pass the slam might go twelve down vulnerable.

6♣ Pass 6♥ Pass (as the Honolulu bulletin insisted on put-

6NT ting it) ‘this made 26 tricks difference!’ • Do not cue-bid a shortage in your

American championships in Honolulu. At the other table the Italians bid to 6♥ • Bidding a major-suit game over an

What would you say on David Berkowitz’s and the Americans sacrificed in 6♠, which opposing pre-empt suggests a

cards when North opens 3♦? I am tempted cost 500. powerful hand. There is no need

overcall. Such a bid, particularly when 5, slams – 3. a take-out double instead.

made at adverse vulnerability, shows a