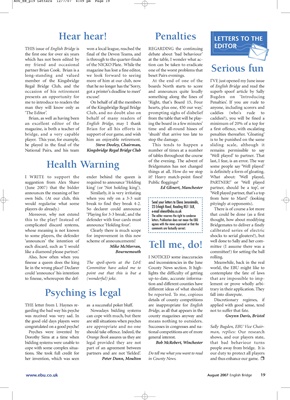 Hear hear! Penalties LETTERS TO THE

THIS issue of English Bridge is won a local league, reached the REGARDING the continuing EDITOR

the first one for over six years final of the Devon Teams, and debate about ‘bad behaviour’

which has not been edited by is through to the quarter-finals at the table, I wonder what ac-

my friend and occasional of the NICKO Plate. While the tion can be taken to eradicate

partner Brian Cook. Brian is a magazine has lost a fine editor, one of the worst problems that Serious fun

member of the Kingsbridge more of him at our club, now At the end of one of the I'VE just opened my June issue

Regal Bridge Club, and the that he no longer has the ‘Sorry, boards North starts to score of English Bridge and read the

presents an opportunity for excuse! something along the lines of Bugden on ‘Introducing

me to introduce to readers the On behalf of all the members ‘Right, that's Board 15, Four Penalties’. If you are rude to

man they will know only as of the Kingsbridge Regal Bridge hearts, plus one, 450 our way,’ anyone, including scorers and

‘The Editor’. Club, and no doubt also on prompting sighs of disbelief caddies (who's rude to

Brian, as well as having been behalf of many readers of from the table that will be play- caddies?), you will be fined a

an excellent editor of the English Bridge, may I thank ing the board in a few minutes’ minimum of 20% of a top for

magazine, is both a teacher of Brian for all his efforts in time and all-round hisses of a first offence, with escalating

bridge, and a very capable support of our game, and wish ‘shush’ that arrive too late to penalties thereafter. ‘Gloating’

player. This year, for example, him an enjoyable retirement. stop the damage. is to be punished on the same

he played in the final of the Steve Dooley, Chairman, This tends to happen a sliding scale, although it

National Pairs, and his team Kingsbridge Regal Bridge Club number of times at a number remains permissible to say

of tables throughout the course ‘Well played’ to partner. That

of the evening. The advent of last, I fear, is an error. The way

Health Warning Bridgemates has not changed

things at all. How do we stop

is definitely a form of gloating.

I WRITE to support the ender behind the queen is it? Heavy match-point fines? What about: ‘Well played,

announces the meaning of her Similarly, it is very irritating ‘Well played partner, that's a top

would regularise what some break to find they break 4-2. Send your letters to Elena Jeronimidis, pityingly at opponents).

players do already.) So declarer could announce There is of course a lot more

Moreover, why not extend ‘Playing for 3-3 break’, and the The editor reserves the right to condense that could be done (as a first

this to the play? Instead of defender with four cards must letters. Publication does not mean the EBU thought, how about modifying

complicated discard systems, announce ‘Holding four’. agrees with the views expressed or that the Bridgemates to deliver a finely

to some players, the defender for improvement in this new shocks to serial gloaters?), but

‘announces’ the intention of scheme of announcements! well done to Sally and her com-

each discard, such as ‘I would

Tell me, do! mittee (I assume there was a

committee?) for setting the ball

Also, how often when you I NOTICED some inaccuracies rolling.

finesse a queen does the king The spoil-sports at the L&E and inconsistencies in the June Meanwhile, back in the real

lie in the wrong place? Declarer Committee have asked me to County News section. It high- world, the EBU might like to

to finesse, whereupon the def- (wonderful) joke. up-to-date, accurate informa- that are impossible to imp-

tion and different counties have lement or prove wholly arbi-

different ideas of what should trary in their application. They

Psyching is legal be reported. To me, copious fall into disrepute.

THE letter from L Haynes re- as a successful poker bluff. are inappropriate for English applied with good sense, tend

garding the bad way his psyche Nowadays bidding systems Bridge, as all that appears in the not to suffer that fate.

was received was very sad. In can cope with much, but there county magazines anyway and Gwynn Davis, Bristol

the good old days players were are still situations when psyches means nothing to outsiders.

congratulated on a good psyche! are appropriate and no one Successes in congresses and na- Sally Bugden, EBU Vice Chair-

Psyches were invented by should take offence. Indeed, the tional competitions are of more man, replies: Our research

Dorothy Sims at a time when Orange Book assures us they are general interest. shows, and our players state,

bidding systems were unable to legal provided they are not Bob McRobert, Winchester that bad behaviour turns

cope with some complex situa- part of an agreement between people away from bridge. It is

tions. She took full credit for partners and are not ‘fielded’. Do tell me what you want to read our duty to protect all players

her invention, which was seen Peter Dunn, Moulton in County News. and thus enhance our game.