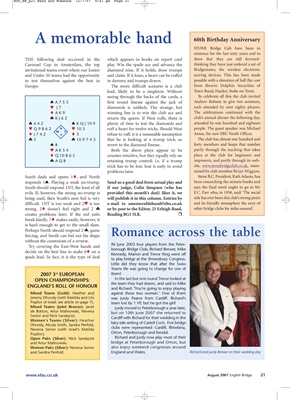 STONE Bridge Cub have been in

existence for the last sixty years and to

Carousel Cup in Amsterdam, the top play. Win the spade ace and advance the thinking they have just ordered a set of

and Under-20 teams had the opportunity and claim. If it loses, a heart can be ruffed scoring devices. This has been made

to test themselves against the best in in dummy and trumps drawn. possible with a donation of half the cost

Europe: The more difficult scenario is a club from Brewin Dolphin Securities of

lead, likely to be a singleton. Without Town Road, Hanley, Stoke on Trent.

seeing through the backs of the cards, a To celebrate all this the club invited

♠ A753 first round finesse against the jack of Andrew Robson to give two seminars,

♥ J7 diamonds is unlikely. The strange, but each attended by over eighty players.

♣ KJ62 return the queen. If West ruffs, there is club’s annual dinner the following day,

♦ J742 S ♦ 3 refuse to ruff, it is a reasonable assumption Amos, the new EBU Youth Officer.

♠ 8 revert to the diamond finesse. forty members and keeps that number

♦ Q 10 8 6 5 counter-intuitive, but they equally rely on place at the club for beginners and

♣ AQ8 retaining trump control: i.e. if a trump improvers, and partly through its web-

trick has to be lost, lose it early to avoid site, www.stonebridgeclub.co.uk, main-

responds 1♠. Playing a weak no-trump, Send us a good deal from actual play and been researching the minute books and

South should respond 1NT, the least of all if our judge, Colin Simpson (who has says the final word ought to go to Mr

being used, then South’s next bid is very will publish it in this column. Entries by side has ever been this club’s strong point

difficult. 1NT is too weak and 2♥ is too e-mail to amemorablehand@ebu.co.uk and its friendly atmosphere the envy of

strong. 2♦ doesn’t feel right and 2 ♣ or by post to the Editor, 23 Erleigh Road, other bridge clubs for miles around.’

break kindly, 7♦ makes easily; however, it

is hard enough to get to the small slam.

forcing, and South can bid out his shape

without the constraints of a reverse.

Romance across the table

IN June 2003 four players from the Peter-

Try covering the East-West hands and

decide on the best line to make 6♦ on a

spade lead. In fact, it is the type of deal to play bridge at the Shrewsbury Congress.

Little did they know that after the Swiss

Teams life was going to change for one of

OPEN CHAMPIONSHIPS: In the last but one round Trevor looked at

the team they had drawn, and said to Mike

Mixed Teams (Gold): Heather and against these two women.’ One of them

Jeremy Dhondy (with Matilda and Lilo was Jurdy Pearce from Cardiff. Richard’s

Popilov of Israel; see article on page 7). team lost by 1 VP, but he got the girl!

de Botton, Artur Malinowski, Nevena but on 10th June 2007 she returned to

Cardiff with Richard for their wedding in the

Open Pairs (Silver): Nick Sandqvist Richard and Jurdy now play most of their

and Artur Malinowski. bridge at Peterborough and Orton, but

and Sandra Penfold. England and Wales. Richard and Jurdy Brewer on their wedding day