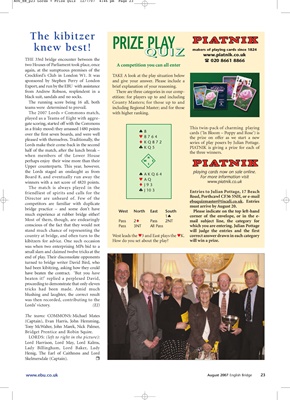 PRIZEQ U I Z makers of playing cards since 1824

two Houses of Parliament took place, once A competition you can all enter

again, at the sumptuous premises of the

Crockford’s Club in London W1. It was TAKE A look at the play situation below

sponsored by Stephen Perry of London and give your answer. Please include a

Export, and run by the EBU with assistance brief explanation of your reasoning.

from Andrew Robson, resplendent in a There are three categories in our comp-

black suit, sandals and no socks. etition: for players up to and including

The running score being 16 all, both County Masters; for those up to and

teams were determined to prevail. including Regional Master; and for those

played as a Teams of Eight with aggre-

gate scoring, started off with the Commons

in a frisky mood: they amassed 1480 points This twin-pack of charming playing

over the first seven boards, and were well

pleased with themselves. Traditionally, the

Lords make their come-back in the second

♣ KQ5 PIATNIK is giving a prize for each of

half of the match, after the lunch break – the three winners.

when members of the Lower House N

perhaps enjoy their wine more than their W E

Upper counterparts. This year, however,

the Lords staged an onslaught as from playing cards now on sale online.

Board 8, and eventually run away the For more information visit

winners with a net score of 4820 points.

The match is always played in the

friendliest of spirits and calls for the

Director are unheard of. Few of the Road, Porthcawl CF36 5NH, or e-mail

competitors are familiar with duplicate

must arrive by August 20.

much experience at rubber bridge either! 1♠ corner of the envelope, or in the e-

Most of them, though, are endearingly Pass 2♦ Pass 2NT mail subject line, the category for

conscious of the fact that they would not Pass 3NT All Pass which you are entering. Julian Pottage

country at bridge, and often turn to the West leads the ♥3 and East plays the ♥K. correct answer drawn in each category

kibitzers for advice. One such occasion How do you set about the play? will win a prize.

was when two enterprising MPs bid to a

small slam and claimed twelve tricks at the

end of play. Their disconsolate opponents

had been kibitzing, asking how they could

have beaten the contract. ‘But you have

beaten it!’ replied a perplexed David,

proceeding to demonstrate that only eleven

tricks had been made. Amid much

blushing and laughter, the correct result

was then recorded, contributing to the

LORDS: (left to right in the picture):

Henig, The Earl of Caithness and Lord