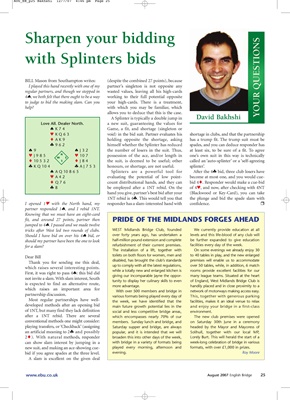 BILL Mason from Southampton writes: (despite the combined 27 points), because

regular partners, and though we stopped in wasted values, leaving all his high-cards

4♠, we both felt that there ought to be a way working to their full potential opposite

to judge to bid the making slam. Can you your high-cards. There is a treatment,

help? with which you may be familiar, which

allows you to deduce that this is the case.

A Splinter is typically a double jump in David Bakhshi

Love All. Dealer North. a new suit, guaranteeing the values for

♠K74 Game, a fit, and shortage (singleton or

♥KQ63 void) in the bid suit. Partner evaluates his shortage in clubs, and that the partnership

♦AK9 holding opposite the shortage, asking has a trump fit. The trump suit must be

♣962 himself whether the Splinter has reduced spades, and you can deduce responder has

♥ 10 7 possession of the ace, and/or length in one’s own suit in this way is technically

♥A42 evaluating the potential of low point- become at most one, and you would cue-

♦Q76 count distributional hands, and they can bid 4♦. Responder would make a cue-bid

hand you give, partner’s best bid after your (Blackwood or Key-Card), you can take

1NT rebid is 4♣. This would tell you that the plunge and bid the spade slam with

I opened 1♥ with the North hand, my responder has a slam-interested hand with confidence.

partner responded 1♠, and I rebid 1NT.

Knowing that we must have an eight-card

fit, and around 27 points, partner then PRIDE OF THE MIDLANDS FORGES AHEAD

jumped to 4♠. I passed and we made twelve

Should I have bid on over his 4♠ bid, or over forty years ago, has undertaken a levels and this life-blood of any club will

for a slam? refurbishment of their current premises. facilities every day of the week.

The installation of a lift, together with On some evenings we already enjoy 30

toilets on both floors for women, men and to 40 tables in play, and the new enlarged

disabled, has brought the club’s standards premises will enable us to accommodate

Thank you for sending me this deal,

up to comply with all the latest regulations, over 50 tables, while, in addition, 6 match

First, it was right to pass 4♠: this bid did

giving our incomparable Jayne the oppor- many league teams. Situated at the heart

not invite a slam. With slam interest, South

tunity to display her culinary skills to even of England, West Midlands Bridge Club is

is expected to find an alternative route, more advantage. handily placed and in close proximity to a

which raises an important area for With over 500 members and bridge in network of motorways making access easy.

partnership discussion. various formats being played every day of This, together with generous parking

Most regular partnerships have well- the week, we have identified that the facilities, makes it an ideal venue to relax

of 1NT, but many find they lack definition social and less competitive bridge areas, environment.

after a 1NT rebid. There are several which encompasses nearly 70% of our The new club premises were opened

conventional methods one might consider: members. Sunday lunch and bridge, and on Saturday 30th June in a ceremony

playing transfers, or ‘Checkback’ (assigning Saturday supper and bridge, are always headed by the Mayor and Mayoress of

an artificial meaning to 2 ♣ and possibly popular, and it is intended that we will Solihull, together with our local MP,

2 ♦ ). With natural methods, responder broaden this into other days of the week, Lorely Burt. This will herald the start of a

new suit, and making an ace-showing cue- played every morning, afternoon and formats, with over £1,000 in prizes.

bid if you agree spades at the three level. evening. Roy Moore

A slam is excellent on the given deal