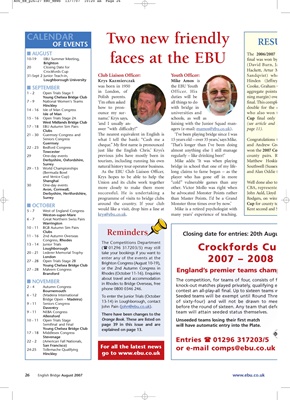 final was won by

■ SEPTEMBER was born in 1950 the EBU Youth Cooke, Graham O

1-2 Open Trials Stage 1 in London, of Officer. His aggregate points

7-9 National Women's Teams ‘I’m often asked all things to do final. This comple

how to pron- with bridge in double for the d

Seniors Congress what I tell the bank: “Cash me a 15 years old – over 35 years,’ says Mike. Congratulations t

Guernsey cheque.” My first name is pronounced ‘That’s longer than I've been doing and Andrew Gre

Towcester just like the English Chris.’ Krys’s almost anything else I still manage won the 2007 Co

Derbyshire, Oxfordshire, tourism, including running his own Mike adds: ‘It was when playing Matthew Hoskin

natural history tour operator business. bridge in school that one of my life- Southwell (Sussex

(Bermuda Bowl As the EBU Club Liaison Officer, long claims to fame began – as the and Alan Oddie (

Avon, Cornwall, more closely to make them more other. Victor Mollo was right when CBA, represente

Derbyshire, Hertfordshire, successful. He is undertaking a he advocated Monster Points rather John Auld, Lloyd E

Surrey programme of visits to bridge clubs than Master Points. I’d be a Grand Rodgers, on winn

around the country. If your club Monster three times over by now.’ Cup for county te

5-7 West of England Congress would like a visit, drop him a line at Mike is a retired psychologist with Kent second and S

take your bookings if you want to

enter any of the events at the

or the 2nd Autumn Congress in

about travel and accommodation

The competition, for teams of four, consists of f

Bournemouth contest an all-play-all final. Up to sixteen teams w

13-14) in Loughborough, contact of sixty-four) and will not be drawn to mee

Daventry John Pain (john@ebu.co.uk). before the round of sixteen. Any team that defe

There have been changes to the team will attain seeded status themselves.

Semifinal and Final page 39 in this issue and are will have automatic entry into the Plate.

For all the latest news or e-mail comps@ebu.co.uk