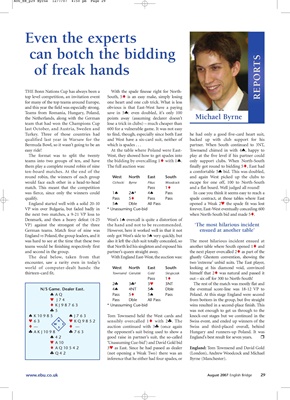 can botch the bidding

for many of the top teams around Europe, one heart and one cub trick. What is less

and this year the field was especially strong. obvious is that East-West have a paying

the Netherlands, along with the German points away (assuming declarer doesn’t Michael Byrne

last October, and Austria, Sweden and 600 for a vulnerable game. It was not easy

Turkey. Three of those countries had to find, though, especially since both East he had only a good five-card heart suit,

qualified last year in Warsaw for the and West have a six-card suit, neither of backed up with club support for his

Bermuda Bowl, so it wasn’t going to be an which is spades . . . partner. When South continued to 3NT,

easy ride! At the table where Poland were East- Townsend chimed in with 4♠, happy to

The format was to split the twenty West, they showed how to get spades into play at the five level if his partner could

teams into two groups of ten, and have the bidding by overcalling 1 ♦ with 1 ♠ . only support clubs. When North-South

them play a complete round robin of nine The full auction was: finally got round to bidding 5♦, East had

ten-board matches. At the end of the a comfortable 5♠ bid. This was doubled,

round robin, the winners of each group West North East South and again West picked up the clubs to

would face each other in a head-to-head Cichocki Byrne Pikus Woodcock escape for one off, 100 to North-South

match. This meant that the competition Pass 1♦ and a flat board. Well judged all round!

was fierce, since only the winners could 1♠ 2♠* 4♠ Pass In case you think it seems easy to reach a

Denmark, and then a heavy defeat (4-25 West’s 1♠ overcall is quite a distortion of

VP) against the strongest of the three the hand and not to be recommended. ‘The most hilarious incident

German teams. Match four of nine was However, here it worked well in that it not ensued at another table’

England vs Poland, the group leaders, and it only got West’s side to 5♠ very quickly, but

was hard to see at the time that these two also it left the club suit totally concealed, so The most hilarious incident ensued at

and second in the group. partner’s queen straight away. the next player overcalled 2♦ as part of the

The deal below, taken from that With England East-West, the auction was: ghastly Ghestem convention, showing the

♠AQ Pass 5♦ 5♠ Pass Poland. At this stage England were second

♥ J74 Pass Dble All Pass from bottom in the group, but five straight

♦KJ98763 * Unassuming Cue-bid wins resulted in a second-place finish. This

♣5 was not enough to get us through to the

♦ — S ♦ — auction continued with 3♣ (once again Swiss and third-placed overall, behind

♣Q42 (not opening a Weak Two) there was an (London), Andrew Woodcock and Michael

inference that he either had four spades, or Byrne (Manchester).