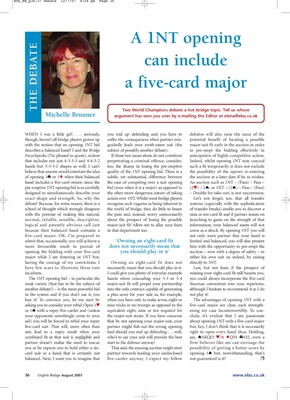 Michelle Brunner argument has won you over by e-mailing the Editor at elena@ebu.co.uk

WHEN I was a little girl . . . seriously, you end up defending and you have to debator will also raise the issue of the

though, haven’t all bridge players grown up suffer the consequences when partner mis- potential benefit of locating a possible

describes a balanced hand? I and the Bridge subject of possibly another debate). to pre-empt the bidding effectively in

Encyclopedia (I’m pleased to quote), reckon If those two issues alone do not constitute anticipation of highly-competitive action.

that includes not just 4-3-3-3 and 4-4-3-2 perpetrating a criminal offence, consider, Indeed, whilst opening 1NT may conceal

hands but 5-3-3-2 shapes as well. I can’t too, the shame in losing the pre-emptive such a fit temporarily, it does not exclude

believe that anyone would entertain the idea quality of the 1NT opening bid. There is a the possibility of the opener re-entering

of opening 1♣ or 1♦ when their balanced subtle, yet substantial, difference between the auction at a later date if he so wishes.

hand includes a five-card minor, since the the ease of competing over a suit opening An auction such as 1NT – (Pass) – Pass –

designed to simultaneously describe your the often more dangerous nature of taking – Double for take-out, is not uncommon.

exact shape and strength. So, why the action over 1NT. Whilst most bridge players Let’s not forget, too, that all transfer

debate? Because, for some reason, there is a recognise such vagaries as being inherent to systems (especially with the sophistication

school of thought which strongly disagrees the world of bridge, they do little to lessen of transfer breaks) enable you to discover a

with the premise of making this natural, the pain and, instead, worry unnecessarily nine or ten-card fit and if partner insists on

normal, reliable, sensible, descriptive, about the prospect of losing the possible launching to game on the strength of that

logical and patently obvious call just major-suit fit! Allow me to allay your fears information, your balanced assets will not

because their balanced hand contains a in that department too. come as a shock. By opening 1NT you will

five-card major. OK, I’m prepared to not only warn partner that your hand is

admit that, occasionally, you will achieve a ‘Owning an eight-card fit limited and balanced, you will also present

major while I am festering in 1NT but, either his own suit or, indeed, by raising

having the courage of my convictions, I Owning an eight-card fit does not directly to 3NT.

have few scars to illustrate those rare necessarily mean that you should play in it. Last, but not least, if the prospect of

incidents. I could give you plenty of everyday example missing your eight-card fit still haunts you,

weak variety (that has to be the subject of major-suit fit will propel your partnership Stayman convention into your repertoire,

another debate!) – is the most powerful bid into the only contract capable of generating although I hesitate to recommend it as I do

in the system and if you don’t use it, you a plus score for your side as, for example, not play it!

lose it! To convince you, let me start by when you have only to make seven, eight or The advantages of opening 1NT with a

asking you to consider your rebid. Open 1♥ nine tricks in no-trumps as opposed to the five-card major are clear, each strength-

or 1♠ with a ropey five-carder and (unless equivalent eight, nine or ten required for ening my case incontrovertibly. To con-

your opponents unwittingly come to your the major-suit strain. If you have concerns clude, it’s evident that I am passionate

aid) you will be forced to rebid your ropey that by not opening your major-suit, your about opening 1NT with a five-card major

five-card suit. That will, more often than partner might fish out the wrong opening but, hey, I don’t think that it is necessarily

not, lead to a ropey result when your lead should you end up defending . . . well, right to open every hand thus. Holding,

partner doesn’t realise the need to rescue start to the defence anyway! firm believer like me can envisage the

you as he expects you to hold either a six- That said, the ensuing auction might steer possibility of getting a better score by

card suit or a hand that is certainly not partner towards leading your undisclosed opening 1♠ but, notwithstanding, that’s

balanced. Next, I want you to imagine that five-carder anyway. I expect my fellow not guaranteed is it?