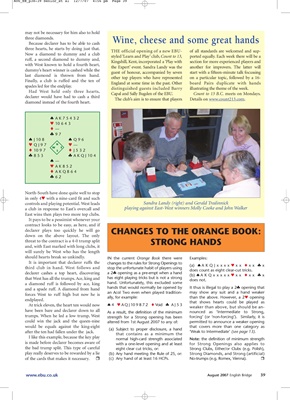 may not be necessary for him also to hold

Because declarer has to be able to cash Wine, cheese and some great hands

three hearts, he starts by doing just that.

Now a diamond to dummy and a club

styled ‘Learn and Play’ club, Count to 13, ported equally. Each week there will be a

ruff, a second diamond to dummy and,

Kingshill, Kent, incorporated a ‘Play with section for more experienced players and

with West known to hold a fourth heart,

the Expert’ event. Sandra Landy was the another for improvers. The latter will

dummy’s heart winner is cashed while the

guest of honour, accompanied by seven start with a fifteen-minute talk focussing

last diamond is thrown from hand.

other top players who have represented on a particular topic, followed by a 16-

Finally, a club is ruffed and the ten of

England at some time in the past. Other board Pairs duplicate with hands

spades led for the endplay.

distinguished guests included Barry illustrating the theme of the week.

Had West held only three hearts,

Capal and Sally Bugden of the EBU. Count to 13 B.C. meets on Mondays.

declarer would have had to cash a third

The club’s aim is to ensure that players Details on www.count213.com.

diamond instead of the fourth heart.

North-South have done quite well to stop

in only 4♥ with a nine-card fit and such

It pays to be a pessimist whenever your

contract looks to be easy, as here, and if

declarer plays too quickly he will go

down on the above layout. The only

CHANGES TO THE ORANGE BOOK:

threat to the contract is a 4-0 trump split

and, with East marked with long clubs, it

will surely be West who has the length

should hearts break so unkindly. IN the current Orange Book there were Examples:

does count as eight clear-cut tricks.

declarer cashes a top heart, discovering a 2♣ opening as a pre-empt when a hand

that West has all the trumps. Ace, king and has eight playing tricks but is not a strong

a diamond ruff is followed by ace, king hand. Unfortunately, this excluded some

and a spade ruff. A diamond from hand hands that would normally be opened by It thus is illegal to play a 2♣ opening that

forces West to ruff high but now he is

ally, for example: than the above. However, a 2♥ opening

that shows hearts could be played as

weaker than above, but should be an-

have been bare and declarer down to all As a result, the definition of the minimum nounced as ‘Intermediate to Strong,

trumps. When he led a low trump, West strength for a Strong opening has been forcing’ (or ‘non-forcing’). Similarly, it is

could win the jack and the queen-nine altered from 1st August 2007 to any of: permitted to announce a weaker opening

(a) Subject to proper disclosure, a hand

after the ten had fallen under the jack. ‘Weak to Intermediate’ (see page 13).

that contains as a minimum the

I like this example, because the key play normal high-card strength associated Note: the definition of minimum strength

play really deserves to be rewarded by a lie (b) Any hand meeting the Rule of 25, or: Strong Diamonds, and Strong (artificial)