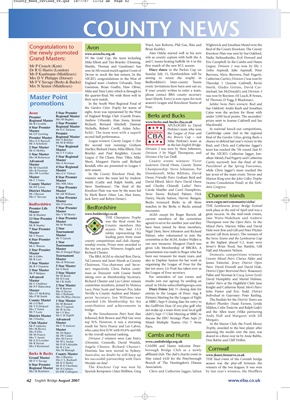 Congratulations to Avon Brian Keable). final of the County Knockout. The County

role as county captain with both the A Nadia Stelmashenko, Eryl Howard and

Grand Masters: IN the Gold Cup, the team including

and C teams beating Suffolk 16-4 in the

Mike Elliott and Tim Brierley (Denning, Eric Campbell. In the Cambs and Hunts

Mrs D V Philipps (Dorset) NICKO, congratulations to the West of aiming to retain the trophy in Catherine Curtis); Division 2 was won by

Mike and Tony Letts) which is through to if your county wishes to enter a team, michael, Ian McDonald); and Division 3

the quarter-final. We wish them well in please contact BBA county secretary was won by Royston (M Leach, B Symes,

the Garden Cities Trophy for teams of Sue Oakford. Andre Kueh and Jonathan

Avon 5 Star Premier eight, Avon was represented by the West Cains won the section for those with

Mr GT Gowling Premier field). The team won with a superb the League of Four and Cambridge came 2nd in the regional

Premier Master Regional Master second-half performance. the Brown Cup – not final of the Garden Cities, giving them a

Mr A Schofield in the last English Bridge.

Mrs S Newman Curtis narrowly lost the final of the

matches in the Berks vs Bucks annual

Premier Life 5 Star Premier Bedfordshire encounter. took place at the end of April and was a

Mr B Shiebert Mrs V M Morris www.bedsbridge.co.uk AGM: except for Roger Barrett, all great success. In the mid-week events,

Master Master was the final event for agreed to serve for another year and they Thompson won the Open Pairs. In the

have been joined by three members, Mixed Pairs, Marion Miles and David

Master tables representing the second (all from Jersey). The winners of

Mr T Pearce Master Palmer, who volunteered to join the

Master 1 Star our new treasurer. Margaret Hatch was as the highest placed C.I. team were

Master the top ten pairs. Winners: Angela and given Life Membership of BBCBA. A

Master Mrs E Dougal-Biggs Richard Chester. presentation was made to Roger who has

Tournament been our treasurer for many years, and Domestic competitions winners:

Mrs B Wileman Val Lawson and Janet Marsh as County

Advanced taking over as Membership Secretary. For reminders of our events and

point Secretary. Jon Williams was Fixtures Meeting for the League of Eight

awarded Life Membership for his at SBBC; Sept 9 closing date for entry to

Mr W Irvine bridge. not make up a team from your local golf

In the Simultaneous Pairs heat that club?); Sept 17 Club Meeting at SBBC to

Club Master Master top N/S. However, it was a storming Mixed Multiple Teams; Oct 7 Swiss At the Manor Club, the Frank Money

Trophy, awarded to the best player after

Mrs P Ellis who came first E/W with 69.6% and 6th assessing the results over the year, was

Berks & Bucks County Master Australia; no doubt he will keep up affiliated club. The club’s charity event in www.jkeast.freeserve.co.uk

Mr K G Butler Woulds on-line! Branch of The Huntingdon’s Disease season was the play-off between the

Regional Master Mr N Crabtree The Knockout Cup was won by Association. winners of the two leagues. It was won