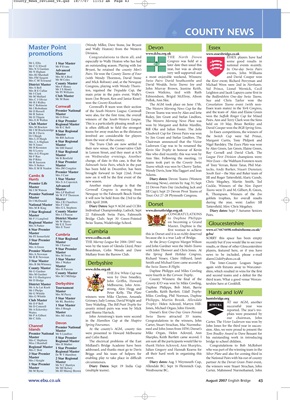 Master Point and Wally Heaton) from the Western Devon Essex

Congratulations to them all, and

ESSEX players have had

Mrs N S Gardam Advanced Bryant, he retained the county Men’s year, but was as always In One-day Swiss Pairs

County Master and Mick Robson) and, at the Newquay

ton, regained the Tregudda Cup, the

The Western Morning News Cup for the

Mr D Russell Premier National of the South-Western League. Cornwall and the team of Alan and Elaine Green

were also, for the first time, the overall Bailey, Jim Grant and Stefan Lindfors. won the Suffolk Ringer Cup for Mixed

Club Master Regional Master This is a particularly pleasing result as it won by Margaret and Robin Mardlin, held on 10 May. Brian Berkley and

8 Star Regional teams for away matches as the distances In Essex competitions, the winners of

Dr I Haigh Master involved are considerable for players the Switch Cup were Sid Prince,

Mrs L A Higham 6 Star Regional from the west of the county. Chairman announced that the Victor Margaret Curtis, Tony Philpott and

Mr N Jones Master The Truro Club are now settled in Ludorum Cup was to be renamed the Nigel Bardsley. The Essex Plate was won

Mrs A G Posgate in Lemon Street, and they meet at 6.30 Slee who died recently; this was won by Ray Cornell and David Clark. The

Mr P Riley change, of date in this case, is that the

Mrs S Stokes Master Falmouth Swiss Pairs, which in the past Teams which was won by Cherry Taylor, of Tony Verran, Remi Tatur, Phil Mat-

Mrs E M B Yeadon Mrs JM Congdon has been held in December, has been tacks, Andy Barker, Stuart Dunstan;

brought forward to Sept 22nd. From Adams. South East – the May and Baker team of

now on it will be the first event of the Diary dates: Devon Teams (Western Jill and Roger Tattersfield, Alaric Cundy,

Master Advanced Another major change is that the 22 Devon Pairs Day (including Jack and Cockle. Winners of the Non Expert

Master Master it will now be held from the 23rd to the goblets trophies, for overall results

Master. Daphne is the

Cumbria this in Dorset and it is so richly deserved gcba/

5 Star Regional www.ccdba.co.uk because she is a true Lady of Bridge. SORRY this space has been empty

Master Master recently but if you would like to see your

Mr J Farmer won by the team of Glenda Lloyd, Peter and John Gardner won the Multi-Teams results, or those of other Gloucestershire

9 Star Premier Boardman, Colin Woods and Dave with John Thrower and Chris Jones. At players, featured here, or if you have

County Master the Swiss Teams B Flight. again with fixtures away to Worcester-

Mr G Gardner shire, which resulted in wins for the first

Mrs M J Millidge were fourth in the Corwen Trophy. and second teams and a defeat for the

Mr D Hodge County Winners: the final of the third team. What a good venue Worces-

Mr D P Bell AT our AGM, another

in the Hamilton Cup at the Shapiro Congratulations to the winners, John Carter. The Victor Ludorum was won by

Islands At the county’s AGM, county ties med and John Jones from HIW; Dorset’s sion. Also, we were proud to present the

Mrs C Hepburn Regional Master The electrical problems of the East am sure all the participants would like to bridge to school children.

Mrs C Bott addressed, and thanks must go to Davis Julian Gregory and Hannah Kearns for who was part of the winning team in the

Master 2 Star Regional enabling play to take place in difficult event. the National Pairs with his out of county