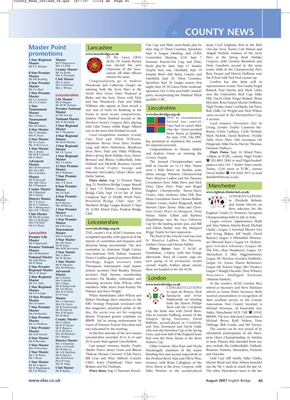 Out Cup and Plate, semi-finals play-by team; Cecil Leighton, first in the Beds

AT the Lancs CBA’s

Abigail Nichols, winners of the Swiss

Pairs at the Spring Bank Holiday

County Master Chairman of the Asso- Trophy heat one, Glenfield; Sept 19 event, while in the Championship Pairs

Mr P A Burt winning both the Swiss Pairs at the Spondon; Oct 3 Otto and Edith (mixed) Boland, Paul Martin and Mark Lehto

Tournament National Master Andrew Petrie finished second in the DUE to circumstances A section.

Mrs M Gibson 5 Star Regional with Giles Foster, whilst Roger Allison Lincs had to cancel their

4 Star Master was in the team that finished second. One-day Green-pointed

Cup: Paul and Hilda Williams. for June 17th. The EBU

Mr M R Cotterill and Andrew Green on winning the

Mrs M J Hill were a little down on Sunday, pairs

Mr A Montgomery Stewart; Open Teams: Mike and Chris- their selection for the

Premier Life Mrs D Arnold completed speedily, with approval of the The final of the Lincoln Gold was won Barton); League 3: Whitefield Albatros-

elections being uncontested. The new Andrew Green and Dennis Mellor.

Mr DM Hilton now going to be presented, would

Master Robert Northage drew attention to the Malinowski on winning

Master Mr J A Bowness their excellent service to the County

7 Star Premier Mr B Freeborough this magazine) presented earlier in the Bowl and the Crockfords Michael Newman, 18 Ennerdale Ave,

Mr M Mort debate. Proposed greater emphasis on Also to Gunnar Hallberg, winner of the 888490. The new Selection Committee is

and Tom Townsend and David Gold,

was welcomed by the meeting. who won the Hamilton Cup at the Spring The county can be very proud of its

Mr D B Newall Mrs M Shadrack In the first matches of the new season Fours, and were half of the England team substantial participation in the Euro-

4 Star Master that won the Swiss Teams at the Bonn

Mr B Bowden District Master 20–0 score-lines against Lincolnshire. Nations Cup. in June. Players that attended from our

Mr R Waddington Club Master Benton and Pat Dunham. Swiss Teams at the Jersey Congress, with out the No 1 seeds to reach the last 16.