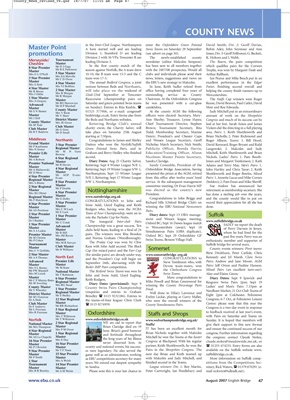 Master Point A have started well and are leading Swiss Teams on Saturday 29 September Robin Adey, John Seymour and Ann

Division 2 with 36 VPs; Towcester B are

Master season against Norfolk, the A team drew with the 2007/08 prospectus. Would all Trophy, was won by Margaret Dash and

Master The annual Bedford Congress, a joint the EBU’s new strategy to Malcolm. excellent performance in the Edgar

District Master the Beds and Northants websites. Ann Sheehy; Treasurer, Lynne Hayes; Congress and much of its success can be

Club Master charity event, the Charity Salver, will Brown; Tournament Secretary, Rita Vickers did the directing in a full playing

President. has done a sterling job over the years,

Regional Master Master www.nottsbridge.org.uk Congratulations to John Briggs and and the county would like to put on

Mr E Luck Team of Four Championship, went on to

Advanced Championship was a great success. Ten vs Worcestershire (away); Sept 18

Master of Perry Darwen in Jersey,

Ms S A Laikin Master clubs held heats, leading to a final of 24

Mr B Hill Simultaneous Pairs (OBA duplicate), where he had lived for the

Mr M Christie and Norma Graham (Woodborough). past five years. Perry was an

(for similar pairs) are already under way, www.somersetbridge .org.uk

Mr A S Thomas North East and the President’s Cup will begin on CONGRATULATIONS to Kennedy and Jyl Marsh. Clare Swiss

Dr A Shah 12 Star Regional the teams-of-four league: Chris Clark who were the overall winners of the Congress, 6-7 Oct, at Felixstowe Leisure

Club Master Master Centre: please note that this year the

Dr F Andrews Congress is a two-day event in response

Oxfordshire Staffs and Shrops with Pairs on Saturday and Teams on

Norfolk Mr T Wilkinson www.oxfordshirebridge.co.uk www.wolverhamptonbridge.org.uk/ Sunday. It is hoped that members will

give their support to this new format

Mr AS La Chapelle Master Mitchell he won the Teams at the Easter the congress: contact Claude Stokes,

the long years of his illness

16 Star Premier Mrs E Day Congress at Blackpool. With his regular claude.stokes@meadowside.me.uk, or

9 Star Premier Mr T F Nunn es were legendary. He also served the Pairs in the Shropshire Congress. The available on the Suffolk website www.

Mr P Smith Master as EBU competitions secretary for many with Malcolm and Judy Mitchell, and More information on Suffolk comp-

years. We extend our deepest sympathy finished second in the Teams. etitions from the Competitions Sec-

Mrs B R Bensley Mr A M Welsh Please note this is your last chance to Peter Cartwright, Ian Pendlebury and mail rickwtrs@talktalk.net).