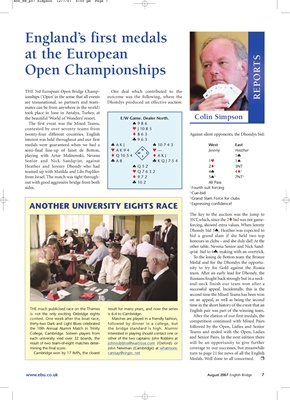 ionships (‘Open’ in the sense that all events outcome was the following, where the

are transnational, so partners and team- Dhondys produced an effective auction:

mates can be from anywhere in the world)

took place in June in Antalya, Turkey, at

The first event was the Mixed Teams, ♠986

interest was held throughout and our first ♣963

out with good aggressive bridge from both ♣ 10 2 All Pass

The key to the auction was the jump to

Dhondy bid 5♠, Heather was expected to

bid a grand slam if she held two top

honours in clubs – and she duly did! At the

qvist bid to 6♣, making with an overtrick.

To the losing de Botton team the Bronze

Medal and for the Dhondys the opportu-

nity to try for Gold against the Russia

team. After an early lead for Dhondy, the

Russians fought back strongly but in a neck-

and-neck finish our team won after a

successful appeal. Incidentally, this is the

second time the Mixed Teams has been won

on an appeal, as well as being the second

time in the short history of the event that an

THE much publicised race on the Thames result for many years, and now the series English pair was part of the winning team.

is not the only exciting Oxbridge eights is 6-4 to Cambridge.

After the elation of our first medals, the

contest. One week after the boat race, Matches are played in a friendly fashion,

thirty-two Dark and Light Blues celebrated followed by dinner in a college, but

the 10th Annual Alumni Match in Trinity the bridge standard is high. Alumni followed by the Open, Ladies and Senior

College, Cambridge. Sixteen players from interested in playing should contact one or Teams and ended with the Open, Ladies

each university vied over 32 boards, the other of the two captains: John Robbins at and Senior Pairs. In the next edition there

result of two team-of-eight matches deter- johnrobbins@waitrose.com (Oxford) or will be an opportunity to give further

mining the final score. John Newman (Cambridge) at whatmore. coverage to our successes, but meanwhile

Cambridge won by 17 IMPs, the closest canisay@virgin. net turn to page 21 for news of all the English

Medals. Well done to all concerned.