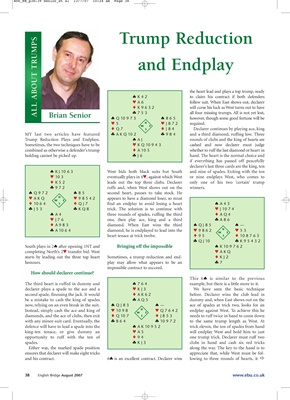 the heart lead and plays a top trump, ready

♠ K42 to claim his contract if both defenders

Trump Reduction Plays and Endplays. ♠ AJ rounds of clubs and the king of hearts are

Sometimes, the two techniques have to be ♥ K Q 10 9 4 3 cashed and now declarer must judge

holding cannot be picked up. ♣ J6 hand. The heart is the normal choice and

if everything has passed off peacefully

♠ K J 10 6 3 West bids both black suits but South and nine of spades. Exiting with the ten

♥ 10 3 eventually plays in 4♥, against which West or nine endplays West, who comes to

♦ K52 leads out the top three clubs. Declarer only one of his two ‘certain’ trump

♠ A4 three rounds of spades, ruffing the third ♦ AQ4

starts by leading out the three top heart Sometimes, a trump reduction and end- ♦KJ2

honours. play may allow what appears to be an ♣7

How should declarer continue?

This 6 ♠ is similar to the previous

The third heart is ruffed in dummy and ♠ 764 example, but there is a little more to it.

second spade, finessing the jack. It would ♦ AK62 before. Declarer wins the club lead in

be a mistake to cash the king of spades ♣ AQ5 dummy and, when East shows out on the

♥ Q7642 endplay against West. To achieve this he

king-ten tenace, or give dummy an ♥ A5 will endplay West and hold him to just

opportunity to ruff with the ten of ♦ 94 one trump trick. Declarer must ruff two

Either way, the marked spade position along the way. The key to the hand is to

ensures that declarer will make eight tricks appreciate that, while West must be fol-

and his contract. 6♠ is an excellent contract. Declarer wins lowing to three rounds of hearts, it