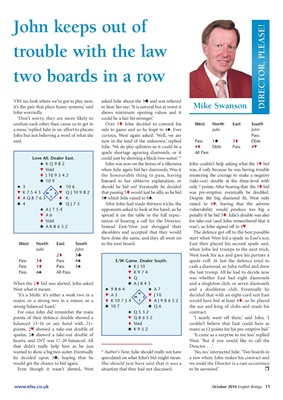 John keeps out of

trouble with the law

two boards in a row

‘OH no, look where we’ve got to play next, asked Julie about the 3® and was relieved

it’s the pair that plays funny systems,’ said to hear her say: ‘It is natural but at worst it Mike Swanson

‘Don’t worry, they are more likely to could be a fair bit stronger.’

a mess,’ replied Julie in an effort to placate side to game and so he leapt to 4´. Ever Julie John

John but not believing a word of what she curious, West again asked: ‘Well, we are Pass

said. now in the land of the unknown,’ replied Pass 1® 3t Dble

Julie. ‘We do play splinters so it could be a 4t Dble Pass 4™

spade shortage agreeing diamonds, or it All Pass

Love All. Dealer East. could just be showing a black two-suiter.’ *

™ Void when Julie again bid her diamonds. Was it was, if only because he was having trouble

t J 10 9 5 4 2 the honourable thing to pass, having mustering the courage to make a negative

® 10 9 listened to her either/or explanation, or (take-out) double at the three-level with

® 4 ® QJ73 After John had made thirteen tricks, the raised to 4t, fearing that the adverse

´ AJ754 opponents asked to look at his hand, so he vulnerability would produce too big a

™ A6 spread it on the table in the full expec- penalty if he bid 5t. Julie’s double was also

t Void tation of hearing a call for the Director. for take-out (and John remembered that it

have done the same, and they all went on start when West led a spade to East’s ace;

West North East South to the next board. East then played his second spade and,

Julie John when John led trumps to the next trick,

2t 3® West took his ace and gave his partner a

t Q was whether East had eight diamonds

When the 2t bid was alerted, John asked ® AJ843 and a singleton club, or seven diamonds

™ J 10 decided that with an eight-card suit East

For once John did remember the main ´ Q532 contract.

spades, 2´ showed a take-out double of ‘It came as a surprise to me too,’ replied

that didn’t really help him as he just Director . . .’

wanted to show a big two-suiter. Eventually * Author’s Note: Julie should really not have ‘No, no,’ interjected Julie. ‘Two boards in

he decided upon 3®, hoping that he speculated on what John’s bid might mean. a row where John makes his contract and

would get the chance to bid again. She should just have said that it was a we avoid the Director is a rare occurrence

Even though it wasn’t alerted, West situation that they had not discussed. to be savoured.’ r