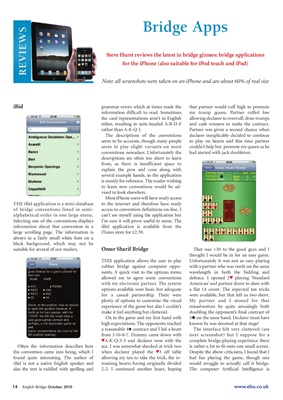 for the iPhone (also suitable for iPod touch and iPad)

Note: all screenshots were taken on an iPhone and are about 60% of real size

either, resulting in suits headed A-R-D-F and cash winners to make the contract.

rather than A-K-Q-J. Partner was given a second chance when

The descriptions of the conventions declarer inexplicably decided to continue

seem to be accurate, though many people to play on hearts and this time partner

conventions nowadays. Unfortunately the had started with jack doubleton.

descriptions are often too short to learn

from, as there is insufficient space to

explain the pros and cons along with

several example hands, so the application

is mostly for reference. The reader wishing

to learn new conventions would be ad-

of bridge conventions listed in semi- access to convention definitions on-line. I

alphabetical order in one large menu. can’t see myself using the application but

Selecting one of the conventions displays I’m sure it will prove useful to some. The

large scrolling page. The information is iTunes store for £2.39.

always in a fairly small white font on a

black background, which may not be

suitable for several of our readers. Omar Sharif Bridge That was +50 to the good guys and I

thought I would be in for an easy game.

nents. A quick visit to the options menu wavelength in both the bidding and

allowed me to agree some conventions defence. I opened 2™ playing ‘Standard

with my electronic partner. The system American’ and partner drove to slam with

options available were basic but adequate a flat 14 count. The expected ten tricks

for a casual partnership. There were were available, but that left us two short.

make it feel anything but cluttered. doubling the opponent’s final contract of

On to the game and my first hand with 5® on the same hand. Declarer must have

high expectations. The opponents reached known he was doomed at that stage!

from J-10-8-7. Dummy came down with next screenshot) but I suppose for a

Often the information describes how ace. I was somewhat shocked at trick two is rather a lot to fit onto one small screen.

the convention came into being, which I when declarer played the ™3 off table Despite the above criticisms, I found that I

found quite interesting. The author of allowing my ten to take the trick, the re- had fun playing the game, though one

iBid is not a native English speaker and maining hearts having originally divided would struggle to actually call it bridge.

alas the text is riddled with spelling and 2-2. I continued another heart, hoping The computer Artificial Intelligence is