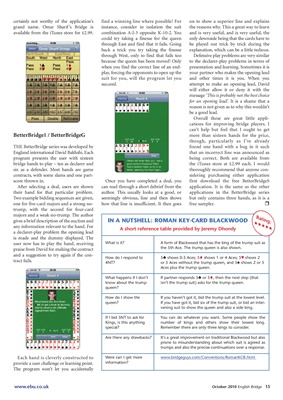 certainly not worthy of the application’s find a winning line where possible! For on to show a superior line and explains

grand name. Omar Sharif ’s Bridge is instance, consider in isolation the suit the reasons why. This a great way to learn

through East and find that it fails. Going be played out trick by trick during the

back a trick you try taking the finesse explanation, which can be a little tedious.

through West, only to find that fails too Defensive play problems are very similar

because the queen has been moved! Only to the declarer-play problems in terms of

when you find the correct line of an end- presentation and learning. Sometimes it is

play, forcing the opponents to open up the your partner who makes the opening lead

suit for you, will the program let you and other times it is you. When you

will either allow it or deny it with the

message ‘This is probably not the best choice

for an opening lead’. It is a shame that a

reason is not given as to why this wouldn’t

be a good lead.

Overall these are great little appli-

cations for improving bridge players. I

can’t help but feel that I ought to get

though, particularly as I’ve already

England international David Bakhshi. Each that an incorrect line was announced as

program presents the user with sixteen being correct. Both are available from

bridge hands to play – ten as declarer and the iTunes store at £2.99 each. I would

six as a defender. Most hands are game thoroughly recommend that anyone con-

contracts, with some slams and one part- sidering purchasing either application

score thrown in. Once you have completed a deal, you first download the free BetterBridgeS

After selecting a deal, users are shown can read through a short debrief from the application. It is the same as the other

their hand for that particular problem. author. This usually looks at a good, or applications in the BetterBridge series

Two example bidding sequences are given, seemingly obvious, line and then shows but only contains three hands, as it is a

one for five-card majors and a strong no- how that line is insufficient. It then goes free sampler. r

trump, with the second for four-card

majors and a weak no-trump. The author Rati

gives a brief description of the auction and HH g:

any information relevant to the hand. For HH

a declarer-play problem the opening lead

is made and the dummy displayed. The

user now has to play the hand, receiving What is it? A form of Blackwood that has the king of the trump suit as

praise from David for making the contract the 5th Ace. The trump queen is also shown.

and a suggestion to try again if the con-

Aces plus the trump queen.

What happens if I don’t If partner responds 5® or 5t, then the next step (that

How do I show the If you haven’t got it, bid the trump suit at the lowest level.

queen? If you have got it, bid six of the trump suit, or bid an inter-

vening suit to show the queen and also a side king.

If I bid 5NT to ask for You can do whatever you want. Some people show the

Kings, is this anything number of kings and others show their lowest king.

special? Remember there are only three kings to consider.

Are there any drawbacks? It’s a great improvement on traditional Blackwood but also

prone to misunderstanding about which suit is agreed as

trumps and also the precise continuations over a response.

Each hand is cleverly constructed to Were can I get more www.bridgeguys.com/Conventions/RomanKCB.html

The program won’t let you accidentally